Jul 22, 2019
Restaurants Get Creative to Attract Workers
By Victoria Campisi 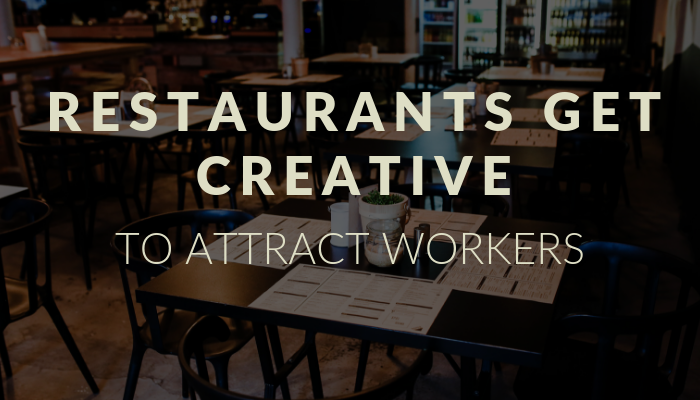 With quit rates among food workers at record highs, employers are looking for new ways to attract and retain employees.

Unemployment is at its lowest level in decades and restaurants are finding fewer workers to fill lower-paid positions, reported The Wall Street Journal (July 21). Businesses are improving pay packages and adding perks such as more scheduling flexibility and bonuses to retain employees.

The U.S. hourly restaurant pay was $14.79 in May, according to BLS figures.

McDonalds is using $150 million to expand its offering to pay for college scholarships for employees and their families. The investment will provide about 40,000 U.S. employees with accessibility to the program, as the company will lower eligibility requirements to 90 days from nine months of employment and drop weekly shift minimums to 15 hours from 20 hours.

Similarly, Aramark will provide the opportunity for eligible hourly associates in the U.S. to receive full tuition coverage for college degrees through InStride, a global learning services enterprise designed specifically to connect prominent employers to leading universities. The Aramark Frontline Education Program is part of a $90 million investment the company made in its employees earlier this year that includes targeted wage and benefit increases, as well as additional training and development.

"It's showing an interest in people beyond this hourly job they have," she said.

Checkers Drive-In Restaurants Inc. is giving employees the option of receiving their pay in more regular increments than bimonthly checks. Incentives such as this are necessary to compete with employers including Amazon, according to Marna Killian, a human-resources executive at the chain's parent company. "Amazon pays $15, and you are not in a hot, 900-sq. ft. box," Killian said. "Our jobs are hard."

Meanwhile, Noodles & Co. and sweetgreen enhanced their parental leave policies. At Noodles & Co. qualifying expecting and postpartum mothers will be able to phase-out and phase-in to their maternity leave, allowing them to work an 80% schedule the four weeks before and the four weeks after maternity leave while receiving 100% pay. At sweetgreen, mothers, fathers, adoptive parents, foster parents, and others with new additions to their families now receive five months fully paid leave.

Dave & Buster's is offering prizes to workers who sell more menu specials or game cards, and chains including Applebee's and Burger King hired app developer ShiftOne to create an incentive system with the feel of a videogame. The system gives rewards such as free meals and more scheduling flexibility to employees who receive strong satisfaction scores from customers they serve, according to ShiftOne.