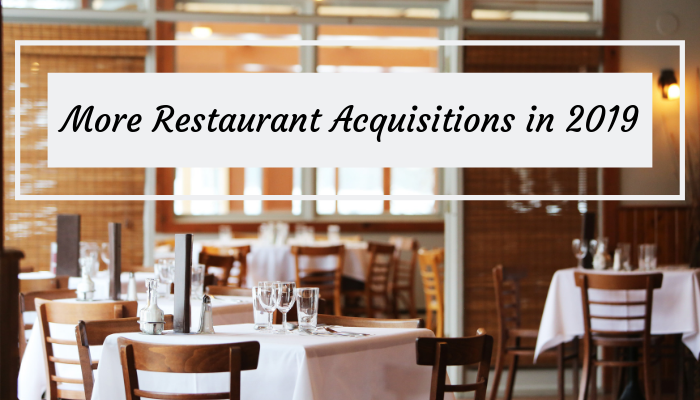 There have been about 30 acquisitions of restaurants or restaurant delivery/tech companies so far in 2019, in-line with the same time in 2018, according to Food Institute data, and the numbers appear to be going up.

As new and existing players look to capture eaters with increasingly changing tastes, innovation is fueling competition between fast growing startups and older brands are struggling to keep up.

Vintage Capital Management LLC said it was prepared to launch a buyout bid for Red Robin Gourmet Burgers Inc. and shares of the company soared about 31%, putting them on track for the biggest one-day gain since the chain went public in July 2002, reported MarketWatch (June 13).

The company remains open to all opportunities to create value, and said it would "of course consider any bona fide offer" made by Vintage to buy the company. In March, the company became the largest restaurant chain to serve the Impossible burger, appealing to the plant-based crowd, reported MarketWatch (March 29).

Meanwhile, regional fast-food chain Jack's Family Restaurants LP is reportedly weighing a sale, according to The Wall Street Journal (June 13). People familiar with the matter believe Jack's could reach a valuation of around $800 million or more based on its growth and multiples that other restaurant groups are fetching.

The company is seeking a new buyer about four years after receiving an investment from Toronto-based Onex. Under the firm, Jack's focused on opening new locations.

Furthermore, Perkins Restaurant & Bakery is in the process of being sold, according to a company spokesperson. Perkins' year-to-date same-store sales are up 5.1% and guest traffic increased 3.9%, while its Marie Callender's unit saw same-store sales jump 6.9% and guest traffic up 5.4%, reported Buffalo Business First (June 10). That's in line with a 4.6% increase in overall foodservice sales through May 31 this year, according to Food Institute data.