May 21, 2019
Reconciling National Uniformity with the Ongoing Class Action Trend
By Michael O'Flaherty 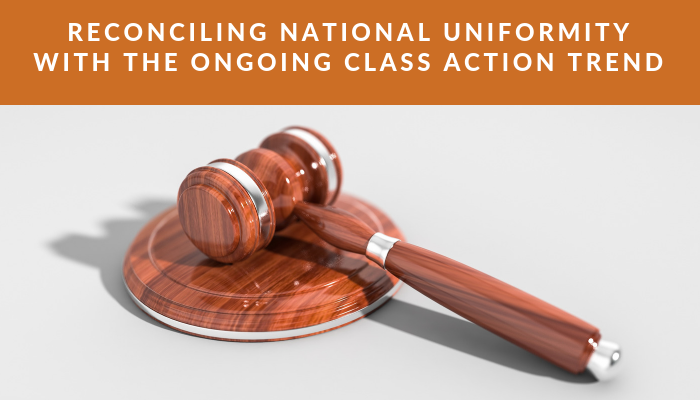 Since its enactment in 1938, the Federal Food, Drug, and Cosmetic Act (FD&C Act), along with FDA regulations implementing it, has served to safeguard consumer interests by requiring food labeling that is not false or misleading, and that declares specified mandatory information. While legally authorized to regulate food labeling, even the Federal Trade Commission (FTC), since 1971, has acknowledged that FDA "will exercise primary jurisdiction over all matters regulating the labeling of foods." [See: Memorandum of Understanding Between the Federal Trade Commission and the Food and Drug Administration (MOU 225-71-8003).]

FDA's exercise of such primary jurisdiction has "stood the test of time." Whereas in 1938 most food was both produced and sold locally, today most foods are made in one locality and sold nationwide (and globally). The FD&C Act, as administered by FDA, has continued to serve its purpose very well throughout this food market evolution.

Recognizing and fostering successful continuance of this evolution, in 1990 Congress legislated that mandatory aspects of food labeling must be nationally uniform. [See: Pub. L. No. 101-535 § 6 (Nov. 8, 1990) (now codified at 21 U.S.C. § 343-1).] This legislation was mutually beneficial both for consumers — because it harmonized presentation of important food labeling information — and for food manufacturers — because it foreclosed being subjected to differing food labeling requirements across our 50 States. Moreover, the law placed responsibility for administering the harmonized aspects of food labeling within the experienced purview of FDA. Finally, while not required by the law, the FTC expressly committed to keeping its enforcement practices for nutrient content claims and health claims made in food advertising in essential harmony with FDA's food labeling requirements. [See: Enforcement Policy Statement on Food Advertising (May 13, 1994); See also Federal Trade Commission Act, 15 U.S.C. §§ 45(a)(1), 52, 55(a)-(b).]

The U.S. food marketplace has evolved further — albeit differently — since 1990, especially over the past decade. During this period, plaintiffs' class action attorneys annually have sent food manufacturers hundreds of "demand letters" that allege a company's food labeling and/or advertising representations are false or misleading/deceptive and, therefore, in violation of some State consumer protection law(s) (i.e., laws other than the FFD&C Act, which may not be privately enforced). These demand letters assert that class action litigation will ensue, unless the matter is settled by the food manufacturer by (i) instituting corrective action that addresses the alleged misrepresentation, and (ii) paying the alleged class members monetary damages — which sub silencio include substantial attorneys' fees.

This class action trend has been helpful to the extent that it has removed some misrepresentations about foods from the marketplace in situations where FDA lacks enough resources to intervene. Nonetheless, from a public policy perspective, condoning its continuance is ill-advised:

A legislative endeavor presently is warranted once again to safeguard and foster national uniformity in regulation and enforcement of food labeling representations.

As a potential model, California's Prop 65 requires that private attorneys give at least 60-days' notice to the Attorney General (AG) and the relevant district attorney, city attorney, or prosecutor — and find no public action commenced and diligently prosecuted by these authorities — before commencing a private action for Prop 65 enforcement. Cal. Health & Safety Code § 25249.7(d). In appropriate circumstances, the AG may notify the private attorney that the AG believes there is no merit to the action. Cal. Health & Safety Code § 25249.7(e)(1)(A). A similar prior notice approach would be beneficial for food labeling representations.

Congress should be approached and persuaded to re-engage national uniformity as it did in 1990. The FD&C Act ought to be amended to require that private attorneys give prior notice to FDA before sending a demand letter or initiating litigation challenging, under a consumer protection law, any representation made in food labeling. This would give FDA, our federal agency with most expertise in such matters, an opportunity — bearing national uniformity in mind — to prohibit the challenge, to pursue the challenge itself, or to authorize the private attorney to proceed.

Uber launched grocery delivery services under its Eats Pass and Uber Eats programs, reported Tech Crunch (July 7). The company launched in 19 cities in Brazil, Canada, Chile, Colombia, and Peru, with plans to expand into the U.S....

Michael J. O’Flaherty is a Principal Attorney at Olsson Frank Weeda Terman Matz PC, located in Washington, DC. For over thirty years he has counseled clients on food labeling matters.