Aug 8, 2018
Potatoes at the Center of New Gene-Editing Procedures
By Chris Campbell 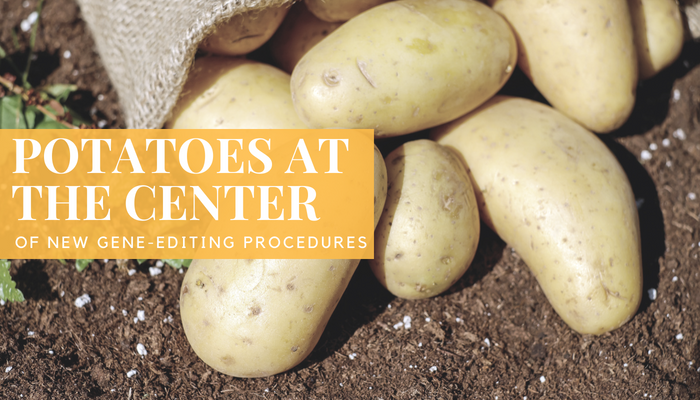 When it comes to food production, three letters can cause panic: GMO. Yet, genetically modified organisms have become an integral part of the food supply chain, and it appears they will remain there for years to come as new techniques to alter the genetics of foods become more prevalent.

Case in point: the J.R. Simplot Co. entered a joint intellectual property licensing agreement for CRISPR-Cas9 and related gene editing tools with DowDuPont and the Broad Institute of MIT and Harvard. The technology allows scientists to make precise changes to the genome of living organisms, which Simplot estimates will bring desirable traits forward in certain fruits and vegetables and advance products to the market in the U.S.

"We’re excited to add CRISPR-Cas9 technology to our platform of tools aimed at providing more sustainable produce for the industry," said Susan Collinge PhD, VP of Simplot Plant Sciences. "These pioneering tools may enable growers to achieve higher yields on less land resulting in fewer pesticides, water and labor needs while extending the quality of a consumer’s favorite foods."

The company noted the technology could be used to eliminate the bruising and browning of potatoes, which could reduce some of the 3.6 billion-lbs. of potato waste recorded annually. The move would not be the first foray into GMO potatoes, as J.R. Simplot launched two GMO potato varieties that we covered in the Food Institute Blog in November 2016.

Additionally, USDA scientists developed a way to streamline the process of inserting multiple genes into a crop plant, according to a study published in The Plant Journal. The technology is expected to speed up the process of developing new varieties of potatoes, rice, citrus and other crops that are better equipped to tolerate heat and drought, produce higher yields and resist diseases and pests.

“Making genetic improvements that were difficult or impossible before will be much easier because we can now insert not just one or two genes, but multiple genes, into a plant in a way that will lead to predictable outcomes,” said Roger Thilmony, a molecular biologist working with USDA's Agricultural Research Service.

Once again, J.R. Simplot will be at the center of the technology. USDA noted the gene stacking technology will be freely available to anyone interested, but J.R. Simplot is planning to use it to introduce multiple genes into potatoes to make them more resistant to late blight, which is caused by a fungus-like organism.

“We have struggled to put multiple late blight resistance genes into potatoes for years. They are very long, complex genes, and with existing technologies it’s been extremely difficult. But the GAANTRY technology will help us tremendously,” said Craig Richael, a director of research and development for J.R. Simplot Co.

Casual dining concepts have seen 58% less traffic since the start of the pandemic, whereas fast food restaurants only experienced a 30% decrease, according to a report from TOP Data.