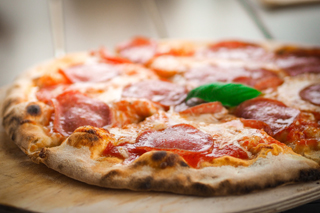 It's easy to be spoiled when it comes to pizza here in the New York City metropolitan market. From small hole-in-the-wall pizzerias in Manhattan to suburban mom-and-pop shops to major national chains, we certainly don't lack options when it comes to pizza. It seems that operators in the market understand this, too, and are working to add convenience to their stores in order to gain more market share.

And that market is huge. According to Technomic, about 41% of consumers eat pizza at least once a week. This was a huge jump compared to two years ago, when only a bit more than 25% reported they ate the Italian dish at least once a week. Some 3 billion pies are consumed by Americans every year. According to Pizza Magazine, there 76,723 pizza restaurants operating in the U.S. which generated more than $44.4 billion, reported Aol.com (Feb. 27).

Ease of ordering is generating sales for the larger chains. Sixty percent of Domino's U.S. sales now come through digital ordering. Same-stores sales jumped 12.2% in the company's last quarter even as the average amount spent per order fell slightly. The company's chief financial officer, Jeffrey Lawrence, noted that it's carry-out and delivery model is helping to drive sales. "We're glad we're not in the dine-in business," he said, reported The State (Feb. 28).

Rival Pizza Hut is feeling the heat, and has partially blamed its poor performance on its reputation as a dine-in restaurant. To that end, the company expanded its ordering capabilities in December 2016 to include Amazon's Alexa Voice Service. Customers can order using voice commands and a select menu. The service is available for carryout or delivery orders only. In January, the company unveiled plans to hire approximately 11,000 U.S. workers in 2017. The new positions will include pizza makers, store managers and delivery drivers, reported MarketWatch (Jan. 19).

Papa John's is also trying to win over more customers with an interesting model. It launched the "Papa Priority" program in select cities. The program allows customers to pay an additional $2.99 fee to skip the line and lower delivery times. Currently, the program is limited to five pies per night, but if it is successful, Papa John's hopes to expand the program to other markets, reported MarketWatch (March 1).

Startup 3-D food printing company BeeHex is looking to throw all of these models out the window. The company raised $1 million in seed funding to launch the Chef 3D, a pizza printer. In the long-term, the company plans to create a network of printers that can create snacks or meals on-the-spot. The Chef 3D will be deployed as a retail kiosk, but may expand the technology to provide a solution for major chains like Dominos, Little Caesars or Pizza Hut, reported TechCrunch (March 1).