May 1, 2018
Philadelphia Soda Tax is Affecting Sales
By Chris Campbell 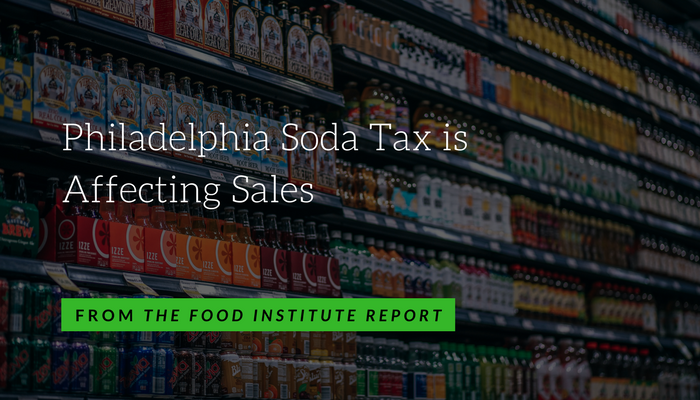 The sugary beverage tax in Philadelphia, PA, is pushing down consumption rates of soda and energy drinks, according to a study from Drexel University published in the American Journal of Preventive Medicine, reported HealthDay (April 12).

Since the city began taxing sodas, energy drinks and other sweetened beverages at the start of 2017, Philadelphians are about 40% less likely than residents of three nearby cities to have a soda every day, and 64% less likely to have an energy drink on a daily basis, the research found.

The new tax adds 1.5 cents per ounce to the cost of sugared and diet beverages, including sodas, fruit drinks and energy drinks – 18 cents for a 12-oz. container.

Bottled water, which was not affected by the added tax, is now a go-to drink. Philadelphians are 58% more likely to drink it every day.

"The 1.5 cents per ounce tax is one of the largest beverage taxes in the U.S. so far," said Yichen Zhong, lead author on the study. "If the tax is fully passed on to consumers, the price for these beverages will increase by around 20%."

A recent survey found that a majority of Philadelphians oppose the city's beverage tax, according to research conducted on behalf of the American Beverage Association (ABA), reported Philadelphia Business Journal (April 20). The majority of residents in west Philly, south Philly, north Philly, the northeast and the northwest oppose the tax, but half of citizens in Center City strongly or somewhat support the levy.

Across the city, 60% of the population is against the tax, stated the study, which was done by David Binder Research for the ABA. In the Northeast, 74% of those surveyed said they are somewhat or strongly opposed to the tax – the highest level of opposition within any section of the city.

Zhong points out similar taxes in Mexico and Berkeley, CA, seem to have led to a lasting decrease in consumption of sugary drinks. However, neither tax applied to diet drinks as well as the sugared variety. The Philadelphia sugary beverage tax is unique in that it is the first to cover both sugared and sugar substitute drinks.

There is uncertainty about whether the early impact of the tax will continue, said Lona Sandon, program director in the department of clinical nutrition at UT Southwestern in Dallas, TX.

"The taxes are likely to work for people who do not feel soda drinking is as important to them in the first place, and for others, it might be they were already planning to give up drinking soda and the tax just added an extra incentive," Sandon said.

The tax would have to be substantial enough to affect "hard-core soda drinkers" in the pocketbook, she said.

Some Philadelphia restaurants and several associations that represent different parts of the beverage industry allege the tax violates the state Constitution because it creates double taxation at the retail level, among other arguments. However, the tax is implemented at the distributor level; the higher prices some customers see at the register is a trickle-down effect.

The ABA-backed lawsuit is scheduled to be heard by the Pennsylvania Supreme Court in mid-May.