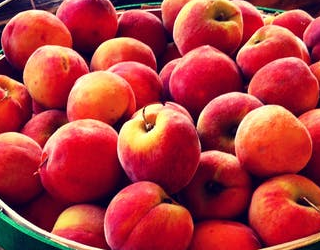 After a few weeks of relatively cool weather and rain, it appears New Jersey will skip spring entirely to jump to summer: it's 90 degrees today outside the Food Institute offices in Upper Saddle River, NJ. And with summer comes one of my favorite foods: peaches.

Northeast peach growers expect a healthy crop in 2017 after the 2016 crop was nearly wiped out by adverse weather events. A mild winter and average bloom time is leading to a high-quality crop. "Everything just dialed in this year," said Al Caggiano, co-owner of Sunny Slope Orchards, in Bridgeton, NJ.

Frank Carlson, who runs Carlson Orchards in Harvard, MA, with brothers Bruce and Robert, called last year a massacre. However, he also said, "we just experienced a beautiful bloom, so we are anticipating a pretty decent crop," he said, hoping to match the roughly 200,000-lbs. he harvested in 2015, reported Miami Herald (May 14).

Georgia peach growers expect to salvage about 70% of the peach crop for the peak summer season. Georgia's peach crop might suffer due to insufficient chill hours from the frost, although growers expect a yield of larger fruit, reported Modesto Bee (May 13).

Across the country, peach thinning began in select extra-early California orchards, according to Pacific Coast Producers. Some growers feel they may not need to thin some varieties due to a lighter set. More updates will be coming from the region, but the company notes pears, fruits and apricots are looking good, too.