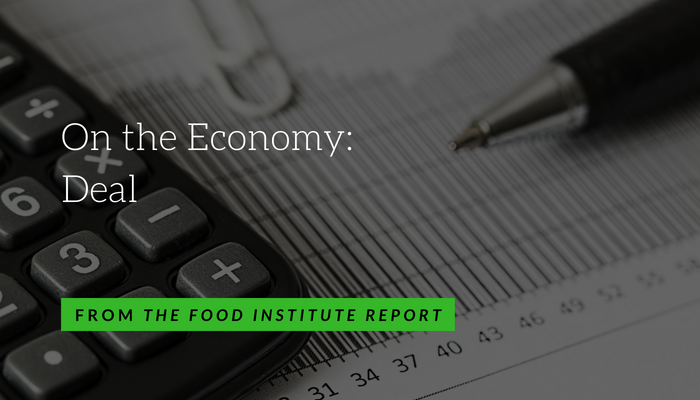 From The Desk of Chief Economist John Dunham

Since it costs a lot to win, and even more to lose/You and me bound to spend some time wondering what to choose/Goes to show, you don't ever know/Watch each card you play and play it slow/Wait until that deal come round. Don't you let that deal go down, no no.

The Trump Administration’s proposed tariffs on a hodge-podge of Chinese products have caused quite a stir around the world as the threat of a potential trade war draws closer. There was a glimmer of hope in recent weeks when both the Secretary of the Treasury and the Secretary of Commerce announced the tariffs were on hold after a framework had been reached in negotiations with China. The financial markets responded with the

S&P 500 jumping by nearly a percent only to fall back a few days later when the U.S. Trade Representative offered less hopeful remarks about the status of the negotiations.

Further adding fuel to the fire, President Trump had a contentious meeting with allies at the G7 Summit prompting the Canadian Prime Minister Justin Trudeau to announce tariffs on the U.S., stating while Canadians are  polite and reasonable, “we…will not be pushed around.”

This type of rhetoric pushed the idea of a trade war to the forefront, on the lips of every pundit and newspaper columnist in the country. However, even though there is a lot of smoke in relation to trade, there really is not much fire. So far, the following trade related initiatives have come out of the White House, mainly via executive orders:

Executive orders include setting up bonding requirements for importers bringing in goods subject to antidumping and countervailing duties; requiring a study of trade deficits; requiring agencies to abide by domestic preference laws and rules; requiring a review of all trade agreements; establishing an Office of Trade and Manufacturing Policy in the White House; requiring an analysis of critical defense related manufacturing and raw materials production industries;

While this all may look like a lot, most of it is bluster.  The only real action taken so far by the administration is pulling the U.S. out of negotiations for TPP, a trade agreement that would have been rejected in a bipartisan way by Congress. In addition, the proposed tariffs on steel and aluminum imports (which are actually quite small) were enacted.

While nothing has changed as trade negotiators work on the minutiae of NAFTA, the President threatened to withdraw from the treaty. But this is more smoke than fire as major parts of NAFTA can’t be scrapped without the consent of Congress. And even if the tariffs were put back into effect, they would be at low most-favored-nation levels under the WTO.

So far, this has not impacted the food business. Looking across all food and food product categories, the U.S. actually is importing much more food over the past couple of years.  In fact, while the U.S. generally has a trade surplus in food and food products, exports haven’t yet recovered after collapsing in 2015. With imports steadily growing, the country has moved into a deficit position on food, something that has not happened since the mid-2000s.

In many ways it seems that most of the trade related bluster is part of a much larger negotiation with China, a process that involves much more than trade. As we know from The Art of the Deal, in a good negotiation everything should be on the table and it appears as if the President is setting a Thanksgiving dinner. The administration clearly has three goals in mind:

Economists know the trade deficit is not an important measurement; rather, it is simply the statistical result of a net inflow of capital to the U.S. from the rest of the world. Since Americans don’t save much (and Chinese do), the U.S. has become a net importer of capital for investment opportunities here. The trade deficit just measures the level to which investment in the U.S. exceeds domestic savings. This is reflected in the terms of trade between countries and is why goods from China or Korea are relatively inexpensive and why Americans purchase so many of them. It’s not a score in a football game.

Chinese attitudes toward trade differ from those of the U.S., but are not mutually exclusive. Their three most important goals are:

So what are the basic interests and where do they converge? First, in order to reach its three goals, China must ensure access to the U.S. market. The U.S. is China’s largest customer by far – accounting for over half of all exports. China cannot continue to grow its economy and win a trade war with the U.S. On the other hand, the U.S. cannot continue to allow the Chinese to flaunt WTO rules on intellectual property.

For the U.S., the trade deficit with China is not really important – but the security provisions are. While China itself is not a threat to the U.S., North Korea is. It is also part of the region that China wants to lay dominance over. So, there are synergies between the American and Chinese positions. Through negotiations, trade relations can be maintained, military threats reduced, Chinese policing powers increased, and all can fall under agreed upon WTO rules. The devil of course is in the details, and that is what all of the smoke is about.

Jerry Garcia may have been onto something oh those many years ago. Negotiations will be tough, and it might cost a lot to win, and even more to lose. It’s going to be up to the negotiators to watch each card they play, but in the end, this deal may be one of the best things to happen for the world in some time.