May 15, 2018
Nestle Pays Over $7 Billion to Market Starbucks' Products
By Chris Campbell 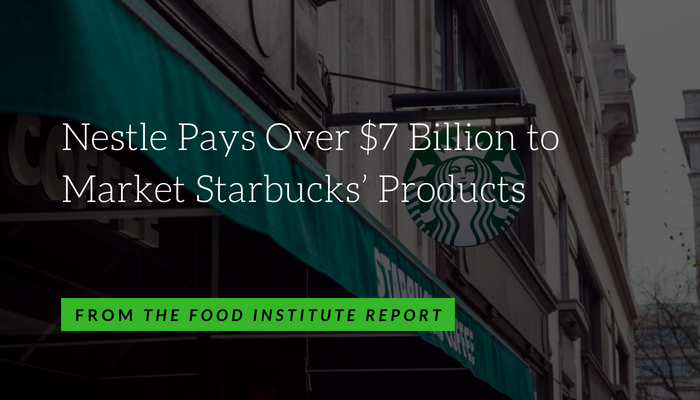 Nestle reached a deal to market Starbucks coffee products in grocery stores and other retail outlets for $7.15 billion on May 7.

Nestle won’t get any physical assets in the deal, which is expected to close by the end of 2018 after regulator review. The company will use the name recognition of Starbucks to help it in the U.S., where analysts stated Nestle’s flagship coffee brand, Nescafe, is seen as a boring, mass-market brand, while its higher-end Nespresso has failed to garner widespread appeal, reported Seattle Times (May 7).

Nestle is buying the rights to market, sell and distribute bags of Starbucks coffee beans and instant coffee in grocery markets beyond North America, which Starbucks has not done on a larger scale, and expand its line of single-serve capsules to include Starbucks coffee and teas. Additionally, Nestle will sell other brands owned by Starbucks, such as Seattle’s Best Coffee, Teavana tea and Torrefazione Italia coffee. The deal bears similarities to a marketing arrangement Starbucks had with Kraft until 2011.

For Nestle, which purchased a stake in 2017 in high-end coffee company Blue Bottle, the deal bolsters the company to better compete with JAB Holdings, who in recent years purchased the coffee businesses and brands associated with Peet’s, Caribou, Stumptown and Krispy Kreme Doughnuts. Starbucks’ deal with JAB to create single-serve coffee for its Keurig brewers is unaffected by the agreement with Nestle.

Nestle will inherit about 500 Starbucks employees who will remain based in Seattle, WA. Starbucks will continue to produce the coffee products in North America, while Nestle will be in charge of manufacturing in the rest of the world. The agreement does not include bottled drinks like iced coffees and Frappuccinos that are made by Pepsi and sold in and outside of Starbucks stores.