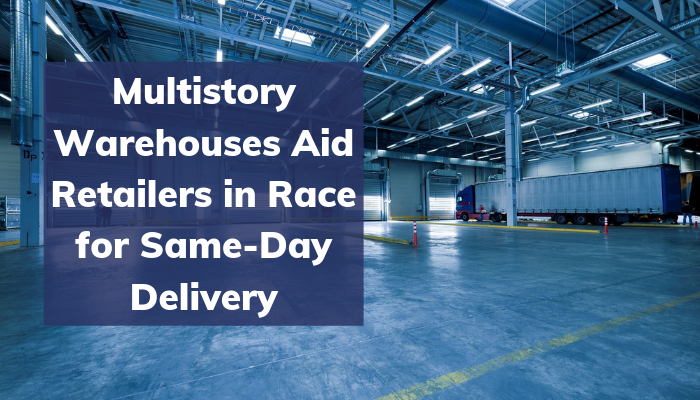 Amazon will take space in a first-of-its-kind three-story warehouse in Seattle.

The Prologis Georgetown Crossroads will allow trucks to drive up ramps and dock on the second floor, reported The Wall Street Journal (Sept. 10). The new type of distribution center could reduce delivery times in cities to hours instead of days.

Target's investment in same-day pickup and delivery options is paying off, reported TechCrunch (Aug. 23). The company, which offers same-day in-store pickup, drive-up and same-day delivery through its acquisition of Shipt, said that these services combined have more than doubled their sales in the last year. In addition, they accounted for more than a third of Target's digital sales, up from about 20% last year.

Modern warehouses like the one coming to Seattle are common in densely-populated Asian and European cities, but absent in the U.S. until recently due to higher land and construction costs. Prologis has multiple-story warehouses abroad where the land is scarce and expensive, and it is now moving into cities like San Francisco, New York and Los Angeles to help companies offer same-day delivery.

"You have to go vertical because you can't find a 50-acre space in the middle of a city close to the customer," said Hamid Moghadam, Prologis's CEO.

Landcosts in these cities are high, and retailers expanding same-day, two-hour and one-hour delivery services there are requiring shipping locations much closer to the customer than before.

There are at least three multistory warehouses planned for New York City, including a three-story warehouse in Brooklyn with backing from Goldman Sachs Group Inc., according to JLL. Online retailers in New York City are looking for more than nine million-sq. ft. of warehouse space, but there is only abour five million-sq. ft. under construction, according to Rob Kossar, a vice chairman at JLL.

"If you need to do same-day delivery in Brooklyn, Queens and downtown Manhattan, you have to be in the city," said Kossar.

In the Seattle warehosue, Amazon will take about 50,000-sq. ft., while Home Depot Inc. plans to take nearly 100,000-sq. ft., according to a person familiar with the matter.

The first two floors of the buildings are like warehouses stacked on top of each other, connected by a ramp to loading docks and a staging area that can accommodate trucks. The third floor is designed for offices and light manufacturing.