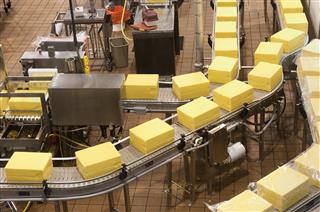 Researching and learning about food product recalls is part of the daily routine here at the Food Institute, and a majority of those stories never reach the national news. Often, the products are recalled due to an abundance of caution, and many never even reach store shelves before they are recalled by the product maker. However, some foodborne illness and food product recall stories become big news, especially when they originate from a beloved brand. Just ask Chipotle or Blue Bell.

Perhaps not as beloved as those previous examples, Maytag Dairy Farms is nevertheless tasked with navigating a potential foodborne illness crisis in the national media with the discovery of listeria contamination in a number of its blue cheese products, including wheels, wedges and crumbles. The company first issued a recall Feb. 19, including 5 lots of "Maytag Blue" blue cheese wedges and wheels alongside the recall of 15 batches of blue cheese crumbles. The company expanded the recall to include 35 additional lots of blue cheese wedges and wheels on Feb. 26.

The recall was spurred after the Iowa Dairy Products Control Bureau discovered contamination during a routine testing session, according to Dustin Vande Hoef, communications director for the state's Department of Agriculture and Land Stewardship. In response, Maytag temporarily ceased operations at its Newton, IA-based production facility as it works with government officials to determine the cause of the contamination.

To date, no illnesses were reported in connection with the affected food products. However, to avoid any potential illnesses, retailers began to withdraw the product from their shelves shortly after the second recall was announced. Whole Foods Market (Feb. 29), Hy-Vee (Mar. 2) and Schnuck Markets (Mar. 4) were among the retailers to voluntarily recall Maytag products in an abundance of caution. These recalls went above and beyond Maytag's expanded recall that it released Feb. 26, putting the company in a bind.

The food sector is facing an increasingly litigious future as more and more law firms and people band together to file class action lawsuits. Maytag was smart to recall its products as quickly as it did, as a potential illness connected to the product can irreparably harm a brand. For more information on how to protect your food business from these types of suits, our Dec. 1, 2015 webinar Using Product Contamination Insurance to Protect Your Food Business is now available for free via our webinar library.

Four years before COVID, a market analysis report by Grand View Research predicted the global food robotics market would attain a value of approximately $3.4 million, with a CAGR of 13.1% by 2025. COVID has rapidly accelerated the growth of the market to meet consumer needs. Food robots, for instance, cooked,...