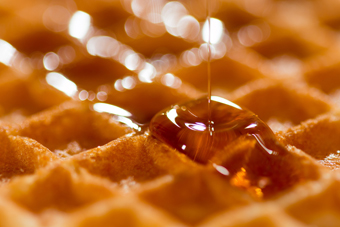 Most maple syrup producers across North America are reporting a banner year in 2016. Increased production is both attributed to excellent weather and an increase in operations extracting and refining the product. But with increased production comes an increase in the amount of end-product, and maple syrup producers are now trying their best to shake the product's reputation as a breakfast condiment.

The U.S. and Canada combined to produce record amounts of maple syrup this year. In the U.S., the Northeastern Region (comprised of Connecticut, Maine, Massachusetts, New Hampshire, New York, Pennsylvania and Vermont) combined to produce a total of about 3.8 million gallons, representing a 27% increase from 2015's production. Vermont remained the top maple syrup producer with about 47.3% of the national output. When other producing states were added to the totals, the U.S. produced nearly 4.2 million gallons.

Canada, which produces up to 70% of the world's maple syrup, was just as lucky. The country had a record year with 13.5 million gallons. What's more, the country's producers boosted output by about 23% above the previous record set in 2013. It was estimated to be worth $400 million. Serge Beaulieu, president of the Federation of Quebec Maple Syrup Producers, noted "we've never seen a harvest of this magnitude." And his opinion carries weight: Quebec is responsible for nearly 90% of the country's maple syrup harvest.

But, what good is additional product if it can't be sold? Turns out, maple-syrup producers are tired of sticking just to breakfast foods. They want to break out of the confines of being labeled as a breakfast condiment.

Maple syrup is being propped up as a flavorful sweetener that can be seen as healthier than sugar or high-fructose corn syrup. Maple water, cheese, cocktails, salad dressing, cotton candy, fudge, pastries and foie gras are starting to pop up on store shelves and restaurant menus across the country. From meat to seafood to dessert, maple syrup producers, chefs and stores are tyring to reintroduce consumers to product that they've likely never encountered in its "real" form. From a Wall Street Journal story on the subject:

“'I don’t believe everyone understands the difference between real maple syrup and imitation syrup,'” says April Lemay, founder of April’s Maple, which makes a spreadable cream, granulated sugar, cotton candy, pancake mix, truffles and a spicy maple mustard from the maple sap it harvests on its farm in Canaan, VT. “'Real maple is better for you and a better tasting way to satisfy our sweet tooth.'”

Despite the abundance of product this year, real maple syrup remains an expensive indulgence. Prices range around $37 a gallon, and despite record production, prices likely won't change soon. Canada controls its supply and increasing consumer demand will likely keep that price point relatively stable. It will be interesting to see if this trend takes hold for the long-term; if production decreases, will prices skyrocket as consumers stick to their new favorite sweetener? Or will this boom in production give producers a year of popularity that recedes as soon as supplies go down?