May 31, 2018
How Manufacturers are Responding to Rising Freight Costs
By Chris Campbell 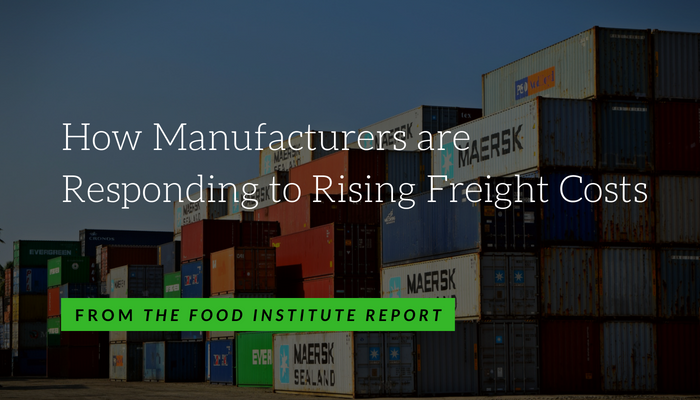 Manufacturers are implementing strategies to offset rising U.S. freight costs, from price hikes to helping freight move more efficiently. Other factors adding to the issue are a trucker shortage and rising gas prices – as of May 21, the average U.S. diesel fuel price was $3.277 per gallon, up $0.038 per gallon from a week ago, and up $0.738 per gallon from one year ago, according to the U.S. Energy Information Administration.

B&G Foods Inc. will raise list prices for the first time in three years and curb promotions to cover freight costs, which it anticipates will remain high. Retail hikes of about 10 cents “across the board” will be in place by the end of May, reported Reuters (May 17).

Amazon implemented a 20% hike for its Prime membership program in part due to rising freight costs, and General Mills is raising the prices of some of its cereals and snacks, reported The Washington Post (May 21).

Tyson Foods estimates the impact of increased freight costs in 2018 will be roughly $250 million, reported Seeking Alpha (May 7). The company is responding by raising its prices, and is working to improve truck weights and lead times.

“We are trying to do all the things we can from a Tyson margin perspective,” says president and CEO Thomas Hayes. “We are passing on the cost, but we are also making sure that we are doing everything we can to lean out our system, making sure that trucks are full, we don’t have more stem miles in the system than needed, and that continuous improvement projects are accelerated.”

Sysco is passing along added costs to its contract customers, and in time, to its independent customers, as well, reported Seeking Alpha (May 7).

“The more freight on the road obviously creates pressure for everybody,” says president and CEO Tom Bene. “There are driver challenges and there are obviously capacity challenges….But I think our teams are doing a nice job working with our various carrier partners ensuring that we were getting the loads we needed and the coverage that we expected as part of our agreements, and candidly working with suppliers too to help soften some of the impact that’s out there.”

While Premium Brands was including added freight expenses in its sale costs, the company is now adjusting its selling, general and administrative expenses, reported Seeking Alpha (May 15). The freight cost hike resulted in just a $400,000 to $500,000 impact as it is still keeping an eye on the overall effect it could have on the industry.

“In the U.S., especially a lot of our business is free on board, our plants,” says CEO George Paleologou. “So we’re not responsible for the majority of the freight, which obviously works out. But it’s a situation we’re monitoring and it’s impacting the entire industry.”

If shippers processed cargo more quickly, they could free up freight capacity by as much as 20%, says Bob Costello, an economist with the American Trucking Associations trade group, reported Portland Press Herald (May 12).

To make its cargo processing more efficient, Nestle boosted its drop-and-hook operations at its U.S. water unit to 61% in 2017 from 57% in 2016, said Ken Rogers, the unit’s director of transportation.  The company enabled drivers to drop a trailer at its shipping yard and hook up another that is already loaded, even before the first is emptied. To execute this, Nestle provided space for parking the extra trailer and its own drivers to maneuver equipment into position.

That strategy, along with other efforts, such as putting radio transmitters on trailers to locate them more quickly and making signage consistent across its yards, helped cut Nestlé’s loading and unloading time by 18%.

But some Nestle facilities which don’t have the space for drop-and-hook operations have taken a different tactic by making driver waiting areas more pleasant. Nestle converted part of its Ontario, CA, warehouse into a break room with restrooms, coffee, bottled water and a television.

In addition to paying standard detention payments at its own locations, Nestle sometimes pays when truckers are delayed at its customers’ facilities.

In The Food Institute's recent webinar "Achieving a self-sustaining business model: Top 3 trends companies need to think about post-COVID-19," Greg Wank, CPA, CGMA, partner and leader of Anchin's food and beverage group, as well as David Eben founder and CEO of Carrington Farms, discussed how to have a more...