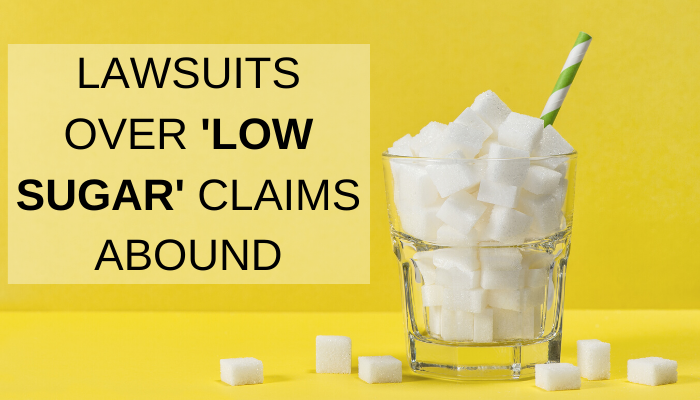 A recent study that examined millions of grocery store purchases in the U.S. found dubious claims about sugar, salt, and fat were common, reported The New York Times (Feb. 26). For example, many fruit juices claiming to be low in sugar had added sugars and more sugar than comparable juices with no claims on them.

Critics say Coca-Cola's Honest Tea is one of the many food companies misleading consumers about the amount of sugar in products. The label states "Just a Tad Sweet," while the 16.9-oz. bottle contains 25 grams of added sugar—or 6 teaspoons of table sugar.

As sugar content becomes more of an issue, consumer advocates are urging the FDA to enforce labeling restrictions of sugary products and define what qualifies a product to be low in added sugar.

Conflicts over whether companies are trying to mislead consumers have even led to several lawsuits.

According to one class action lawsuit, the maker of Steaz iced tea misleads consumers about the sugar content of its products, reported Legal Newsline (Feb. 27). The product is labeled "lightly sweetened" but actually contains 20 grams of sugar, according to the suit against Tipp Distributors, Inc.

"Defendant's branding and packaging of the products are designed to—and does—deceive, mislead, and defraud consumers," the suit said.

"To represent a product as 'lightly sweetened' that contains almost half of recommended daily added sugar intake poses a specific risk of harm to consumers seeking to lower their sugar consumption, including those with diet-related diseases, such as type 2 diabetes," the complaint stated.

Another recent lawsuit argues Coca-Cola misleads consumers about the sugar content of its Gold Peak brands of iced tea, reported Legal Newsline (Feb. 25). Coca-Cola gives the impression the tea products are low in sugar "when they have significant amounts of added sugar," according to the suit, which seeks unspecified monetary damages.

The suit stated the labels include the phrases "Slightly Sweetened," "Sweetened with 50% Less Sugar Than Our Sweet Tea," and "90 Calories Per Bottle."

The lawsuits don't stop at beverages. In fact, in Oct. 2019, Kellogg agreed to pay $20 million to settle a class-action lawsuit that accused the company of falsely advertising some of its most popular breakfast cereals as heart healthy and lightly sweetened, such as Raisin Bran and Smart Start. Plenty of other companies, including Clif Bar, Mondelez, General Mills, Whole Foods, Jamba Juice, and Post Foods, have faced similar lawsuits over the level of sugar in their products.