May 6, 2019
Lab-Grown Meat Gets Closer to Consumers' Plates
By Victoria Campisi 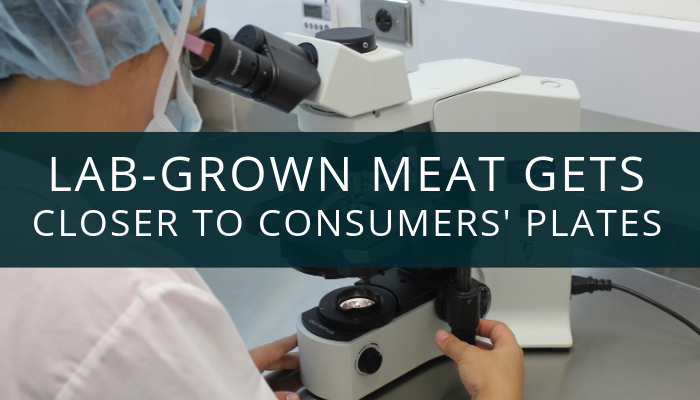 Demand for plant-based options, such as the Impossible Burger, is rising quicker than companies can keep up with. However, for those who want the familiar taste and texture of meat without the animal itself, cell-cultured options are moving closer and closer to being in consumers' kitchens.

U.S. regulators will introduce rules for such products later this year, and companies say they are poised to launch their first commercial products within the same time frame, reported The Washington Post (May 3).

"If only half of it becomes remotely true, it will be one of the most important advancements of the century," said Kristopher Gasteratos, founder of the Cellular Agriculture Society, an international nonprofit organization using donations to advance cellular agriculture.

Startups, such as Finless Foods Inc., are pursuing the technology, working to lower per-lb. costs from tens of thousands of dollars to a range that interested consumers would consider. Berkeley, CA-based Finless Foods produces Bluefin tuna by taking cells from tuna and cultivating them in a lab, The Wall Street Journal reported (May 2). The company plans to start selling the bluefin at the end of 2019.

Mike Selden, the company's founder and CEO, plans to roll out the product in high-end restaurants, then move to mainstream restaurants, delis and eventually supermarkets. He believes lab-grown meat will be a significant part of the market within five years.

Singapore-based Shiok Meats recently completed a $4.6 million seed round, funding its shrimp made from "clean meat," reported Forbes (April 28). The company expects to scale production in 2-3 years, enabling them to deliver their products globally for public consumption. They plan to use the proceeds of their seed round to invest more in research and development, as well as adding on bioprocess engineers.

However, Finless, Shiok and other cultured-meat producers, such as Memphis Meats and Aleph Farms, face several barriers. It's not clear whether customers will eat — much less pay for — the products. Producing cultured meat is considerably more expensive than conventional meat. It costs Finless slightly less than $4,000 to make a pound of tuna.

In order to overcome customer reluctance and high costs, Finless and the other companies will position their products as innovative, humane luxuries worth their price — similar to how exclusive, expensive types of traditional meat are seen. "We don't want to go for low-range, low-cost, low-price product," said Didier Toubia, chief executive of Aleph, an Israeli startup that uses biomedical engineering techniques to combine muscle, fat, blood vessel and other types of cells to replicate beef.

Aleph said it had gotten the cost down to $100 per lb., and industry insiders say American companies are getting the cost to $50 per lb.

Selden hopes that when Finless produces the fish at scale, it will be in line with costs for conventional bluefin. The company already cut the expense from its 2017 prototype, which ran to $19,000 a pound.

In 2018, FDA and USDA agreed to work together on regulations for cell-grown foods, reported The Wall Street Journal (Nov. 16, 2018). Mike Lee, founder of the Future Market, a food lab that works with companies to conceptualize food prototypes, expects that lab-grown meat will be available for purchase in 2019. JUST Inc., which makes cell-grown chicken products, plans to start selling to at least one restaurant by the end of 2019, though it previously planned to hit the market at the end of 2018.

"In a decade or so, lab-grown meat isn't necessarily going to have to command a premium because it'll be as cheap and efficient as any other method, even more efficient," Lee said.

Ultimately, the success of the market will come down to taste and whether it appeals to customers or not.