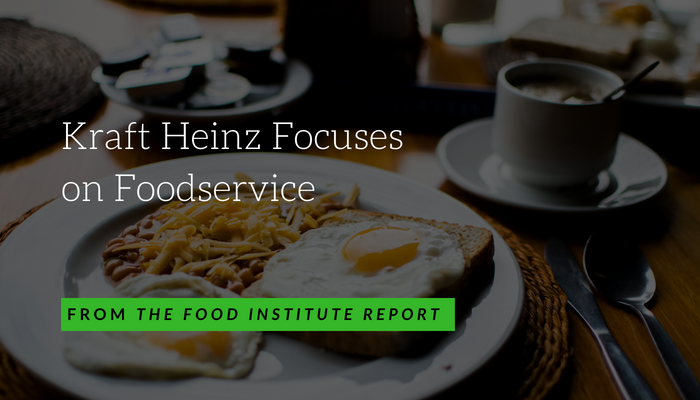 In both category management and go-to-market capabilities, the company now has more capacity to drive category and brand growth, as its product pipeline will be fully in place in the third quarter.

“This is by far the strongest innovation pipeline we have had in place,” CEO Bernardo Hees said on a second-quarter earnings call Aug. 3. The company’s commercial investments are giving it the confidence to change trajectory in both distribution and consumption, especially behind innovation, Hees said.

Europe has had double-digit growth in foodservice, as well as many countries in Asia. In addition, the company is building a factory in Brazil that will help serve the foodservice space.

“It’s been a strategic decision from the company to create capabilities in different countries to push this,” Hees said, noting the company had to create the right packaging and the right product assortment and understand the dynamics of the foodservice channel compared to the retail channel.

In Europe, the Middle East and Africa, Kraft Heinz is looking to sustain the momentum from the newly repatriated Kraft and Bull’s-Eye brands.

While retailers like Walmart are expanding aggressively in the North American market, for instance, CPG brands have not been consolidating at the same pace, Hees noted.

“There are some reasons for that given local pace and regulations, but not to the extent we have seen it. Looking mid or long term, there will be more consolidation in the industry, and we want to be a force behind this when the process happens,” Hees said. “We don’t do something to be happy for a quarter and then regret it for the long term.”

From an international standpoint, Europe, Middle East and Africa are continuing to grow with the same momentum as in the first half of the year. The company is recovering well in Latin America from the trucking strike in Brazil, and in Asia, which had issues with fish supply in Indonesia and inventory timing in China, Hees said.

Kraft Heinz expects its organic net sales growth to take shape in the third quarter, however CFO David Knopf noted in Canada, with near-term risks at play, it may be the fourth quarter until the company sees the turn.

“A number of areas have stayed higher for longer than we anticipated, mainly in freight and transportation; packaging, both resins and cardboard; as well as tariff risk currently impacting foil and aluminum costs in the U.S. and certain products we sell in Canada,” Knopf said.

“I don’t think that this framework will change because of the capabilities we’re developing,” Hees said.

However, the company allegedly declined to bid on Pinnacle Foods, as “such an acquisition would not be a good strategic fit...at the current valuation levels,” according to people familiar with the matter. Sources say Kraft Heinz’s disinterest may mean the firm is looking beyond the center of the store, where growth has been a challenge across the industry, reported CNBC (Aug. 3).

Meanwhile, Kraft Heinz reportedly opened exploratory talks with the Campbell Soup Co. regarding a potential sale, according to people familiar with the matter. Sources predict Kraft Heinz would not pay much of a premium for Campbell’s over its $22 billion valuation, reported New York Post (Aug. 3).

While both Pinnacle and Campbell’s own several brands located in the center of the store, Pinnacle has a large frozen food business but lacks the strength of Campbell’s Pepperidge Farm brand. In addition, Pinnacle may have less room for cost-cutting measures than Campbell’s, making the soup company more attractive to Kraft Heinz.

But as a result of Kraft Heinz facing new difficulties from upstarts, 3G Capital lowered its stake in the company to 22% from 29%, according to a securities filing, reported CNBC (Aug. 9).