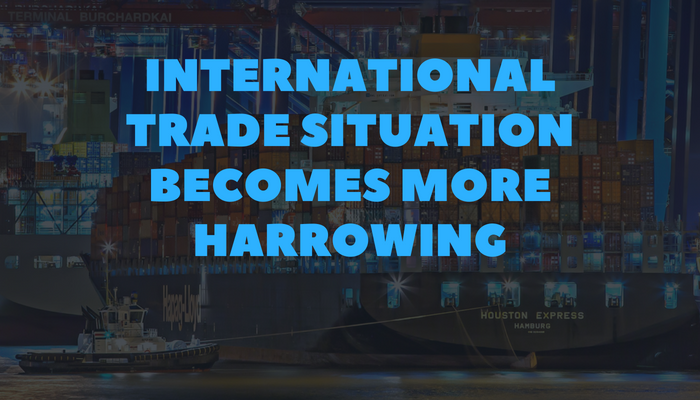 Trade pact renegotiations and pending and potential tariffs are affecting commerce across the globe.

Readers of The Food Institute Report will know that the Trump administration finalized a series of tariffs on about $16 billion worth of Chinese imports Aug. 7, which will include 279 of the original 284 tariff lines that were on a proposed list announced this spring, according to the Office of the U.S. Trade Representative (USTR).

After USTR unveiled the tariff plan, China confirmed it would impose 25% tariffs on an additional $16 billion worth of imports from the U.S. The tariffs will come into effect simultaneously with the U.S. levies on Aug. 23, according to China’s Ministry of Commerce.

A U.S.-China trade war will reduce global output by 0.7% by 2020, with China’s economy taking a 1.3% hit and U.S. GDP dropping 1%, Oxford Economics said in a research note published before the new lists were released.

In the aftermath of these trade decisions, delegations from China, India, Italy and Spain canceled visits to meet with North Dakota's bean, pea and lentil growers due to trade tensions. Some of the delegates represented new buyers and were each expected to make purchase orders of up to 200 metric tons. Growers are concerned competitors, including Canada, Russia and Ukraine, will use the opportunity to vie for China's business, reported CNBC (Aug. 20).

"They indicated it was not the right political time to visit," said Simon Wilson, executive director for the North Dakota Trade Office, who tried to salvage the meetings unsuccessfully. "These delegations are not social visits. They are coming here to buy. It's about building relationships and making the deal."

Nancy Johnson, executive director of the North Dakota Soybean Growers Association, added, "When trade delegations get canceled they stay canceled because the planning is complex. When that happens it impacts our ability for relationship building."

The news comes as the U.S. prepares for a bumper crop of soybeans in 2018. Already, trade tariffs have put a damper on the U.S. 2018 agricultural outlook. USDA forecast soybean production at about 4.59 billion bushels in its Aug. 10 Crop Progress report, up 4% from 2017.

Meanwhile, current and potential tariffs are having "unfavorable consequential impacts on the U.S. economy," according to 91% of survey respondents polled by the National Association for Business Economics. Additionally, about two-thirds noted a withdrawal from NAFTA would have negative effects for the U.S.

Peter Sand, chief shipping analyst at Bimco, described the trade war as a "speeding train, accelerating with every trade-restrictive retaliatory measure imposed and becoming ever more difficult to stop." He added that the trade war "distorts the free flow of goods, changes trade lanes and makes it difficult for ship operators and owners to position ships efficiently in the market."

Already, markets are being disrupted by the tariffs. JBS SA will raise product prices 7% at its processed foods division Seara to offset a surge in feed costs. The company said potential Mexican tariffs and a trade dispute between the U.S. and China are hampering pork sales to Asia and ham sales to Mexico out of the U.S. However, strong demand for beef in the U.S. helped bolster the company's overall operational results, reported Reuters (Aug. 15).

Meanwhile, WH Group Ltd. boosted its U.S. pork exports to Japan, South Korea and Mexico, in an effort to counter slowing Chinese pork demand and reduce the impact of increased tariffs, according to the company's CEO. It also plans to curb hog production and continue to expand its packaged meat business, reported Reuters (Aug. 14).

Additionally, Brazilian farmers are switching to soybeans from sugar to align their crops with Chinese appetites. Brazil's soybean plantings expanded by 2 million hectares in two years while land used for cane shrank by nearly 400,000 hectares during that time. Brazilian soybean exports to China rose to nearly 36 million metric tons in the first half of 2018, up 6% from a year ago, and surged 46% in July when tariffs against the U.S. went into effect, reported The Globe and Mail (Aug. 14).