May 1, 2019
Impossible Foods' Supply Drops Ahead of Burger King Launch
By Chris Campbell 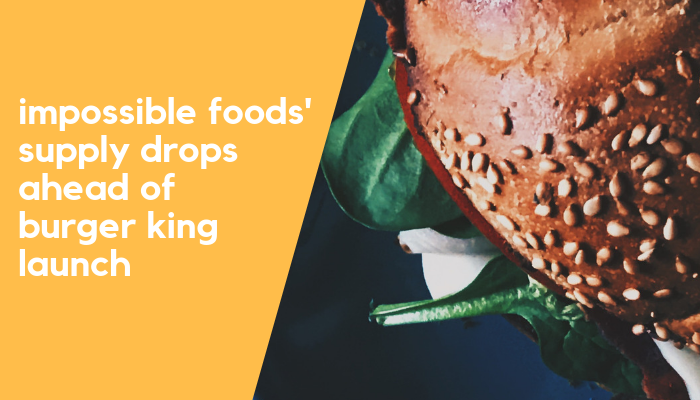 It's not often you see a company announce that it will double its reach just before unveiling it has a supply issue. But Impossible Foods accomplished this feat in the span of a few days.

Impossible Foods, the company behind the widely popular Impossible Burger, is reportedly having trouble keeping up with burgeoning demand for its products. Impossible Foods CFO David Lee noted that demand at the 7,000 locations it currently serves is increasingly steadily, reported CNN (April 30).

Demand is coming from all fronts, ranging from small restaurants to larger chains like White Castle, which sells Impossible Sliders at its U.S. restaurants. Theme parks and college campuses are embracing the range of Impossible Foods' products, as well, causing some supply-side headaches.

The company said it "recognizes the inconvenience that this shortage is causing and sincerely apologizes to all customers, particularly those who have come to depend on the additional foot traffic and revenue that the Impossible Burger has generated." Additionally, it noted it is simply facing a capacity issue, and that the necessary ingredients for the product remain readily available.

The news is a bit surprising, considering the company unveiled a deal with Restaurant Brands International's Burger King business a day before the news of the supply issues surfaced. The companies will partner to expand the Impossible Whopper to some 7,300 U.S. Burger King locations, more than doubling Impossible's current restaurant reach, reported CNN (April 29).

The company began a test of the Impossible Whopper in the St. Louis, MO, market April 1. The Impossible Whopper uses an Impossible Burger patty with the regular Whopper toppings, giving customers "permission to come into the restaurants more frequently" to enjoy a burger while cutting back on meat products, according to Chris Finazzo, president of Burger King North America.

Now, the companies will bring the Impossible Burger to "select new markets this summer" with plans "to target international rollout towards the end of the year," according to Cil.

How will Impossible Foods manage to keep up considering its current situation? Lee notes it is installing a second production line to double its current capacity, and is working to hire a planned third shift at its Oakland, CA, plant, which already has increased the number of hours available for work for employees. For what it is worth, Lee remains confident Impossible Foods will be able to keep up, and that is is "not sparing any expense" to meet demand.