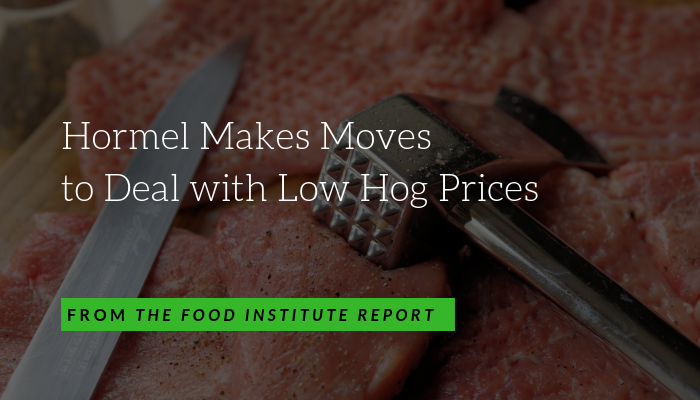 Hormel Foods Corp. wants to improve its position as a food marketer and reduce the effects of volatile hog markets, reported Minneapolis Star Tribune (Aug. 24). The company’s sale of its pork plant in Fremont, NE, was to avoid a costly renovation needed to keep the facility competitive and to lower its exposure to swings in commodities prices, according to Jim Sheehan, the company’s CFO.

Hormel will receive $30 million in cash for the sale of the pork plant to farmers in Minnesota, South Dakota and surrounding states, organized as Wholestone Farms. The deal came after the company conducted a multiyear review of its hog-slaughtering business, which the company built more than

“Our stated goal is to not sell any commodity meat at all,” Sheehan said on a third quarter earnings call Aug. 23.

While Hormel fetched $145 million in cash for the sale of Clougherty Packing, parent company of the Farmer John and Saag’s specialty meat brands, including farm operations in three U.S. states, the Fremont plant’s sale was on a different scale.

“Fremont was not a full business like Farmer John, and the price didn’t include any of the value-added assets,” said president and CEO Jim Snee. “We’ve talked about some of the expenses that we’ll have in 2019 as we relocate those assets, but the price does not include any of that because we will retain that.”

The Fremont plant slaughters and processes about 10,500 hogs a day, one-third of Hormel’s hog volume, which is less efficient than several recently opened slaughter facilities across the upper Midwest. New hog-slaughtering plants that opened last fall include Seaboard Triumph Foods’ plant in Sioux City, IA, which can process 2.6 million hogs a year, and Clemens Food Group’s facility in Coldwater, MI, which can do 3 million head annually.

An old PM Beef plant in Windom, MN, that became PRIME PORK after a $20 million to $25 million investment last year can process 1.3 million head annually, according to Christopher Hurt, a professor of agricultural economics at Purdue University.

“If you have a new competitor in the market, and that new competitor is technologically at the top of the industry in being able to compete at a lower cost, somebody may have to leave,” Hurt says.

Hormel recently invested $80 million to update a slaughter facility in Austin that supplies the company but is is owned and operated by Dallas-based Quality Pork Processors. A similar investment to turn the Fremont facility into a double-shift plant would have been the next step, Snee said.

“If you think about the Austin plant, that was over $80 million and did not include the cost to double-shift this plant, so the capital investment into Fremont would have been very extensive,” Sheehan said.

Instead, executives decided it was time to sell the plant, which has been a part of Hormel since the 1940s.

Hormel expects it will spend $15 million to $20 million to relocate some of the processing functions from Fremont to other company-owned facilities and pay down pension commitments.

WholeStone plans to make a big investment to upgrade the facility. Hormel will remain a key purchaser of the meat processed at the Fremont plant for at least three years.

“The sale of the Fremont facility allows us to do a number of things,” Sheehan said. “We’re able to contractually secure a source of raw material for our value-added business at competitive market prices, reduce the number of hogs we purchase and related exposure to volatility in the hog markets, and avoid significant capital to modernize the facility.”

In the third quarter, Hormel’s commodity pork profits were down 88% to “near break-even levels,” Sheehan said.

The company’s challenges are similar to those of General Mills and other CPG companies, as Hormel grapples with higher freight costs caused by a shortage of drivers, reduced capacity and higher fuel costs. In addition, while Hormel’s international-business unit posted a profit jump of 9% due to higher export sales of Spam and Skippy, tariffs tempered the unit’s overall results as fresh pork export volume, sales and profitability declined sharply in key markets.