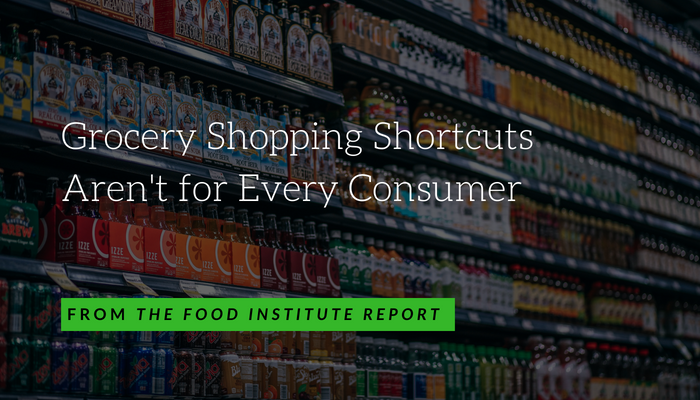 Despite a variety of online options, 84% of U.S. adults report they never order groceries online and 89% never order meal preparation kits, according to Gallup. Instead, U.S. consumers are much more likely to order takeout or go to a restaurant and prefer to shop for groceries by going to a traditional brick-and-mortar store.

According to Gallup’s July 1 to 11 Consumption Habits poll, about one-third of Americans (32%) shop for groceries in person more than once a week, about half (49%) shop once a week and 18% go less often than that. Just 1% say they never go.

In contrast to the 81% who shop at a brick-and-mortar grocer at least weekly, only 4% of U.S. adults order groceries online this often, while another 11% say they do it less frequently. Similarly, just 1% order meal preparation kits weekly and 9% order them less often.

Aside from purchasing their own food to make at home, 45% of adults report eating out at a restaurant at least weekly and 50% eat out twice a month or less.

Meanwhile, 31% order takeout food at least weekly and 53% do so twice a month or less.

The well-to-do cohort relies more on takeout than the average person, with 78% of those earning $75,000 or more per year using that option at least monthly. But takeout is still popular for consumers with lower annual incomes, with 67% of those earning between $30,000 and $74,999 ordering takeout monthly and 58% of those in the less than $30,000 income bracket doing so.

Upper-income Americans grocery shop more than the average consumer as well, with 90% of those in households earning $75,000 or more per year shopping for groceries in brick-and-mortar stores at least weekly, compared to 84% of those earning between $30,000 and $74,999 and 63% of those earning less than $30,000. There wasn’t much difference in grocery store visits by gender, age or even whether an adult has children in the household.

While Gallup reported takeout and grocery shopping to be most popular among the wealthiest demographic, restaurant dining was most strongly related to income. The percentage eating out weekly or more dropped from 63% of those earning $75,000 and above to 41% of those in the middle-income bracket and 21% of those in the lowest income bracket. While age and gender were not big factors, employment status was, as 52% of those working full- or part-time compared to 36% of those not employed reported eating out at least once a week.

Moving away from restaurant dining, the greatest demographic distinctions for the other food purchase methods were evident when focusing on the percentages of Americans who use each at least monthly.

For instance, adults with a child younger than 18 in the household are twice as likely as those without a child to say they order groceries online at least monthly, at 14% compared to 7%.

In addition, parents are more likely than others to order takeout, at 77% vs. 66%.

More broadly, ordering takeout is more common among younger and middle-age adults, as 79% of those age 18 to 34 and 80% of those age 35 to 54 say they order takeout at least monthly, compared to 53% among those 55 and older.