Apr 24, 2018
Grocers, Online Innovators Taking a Bite out of the Meal-Kit Market
By Chris Campbell 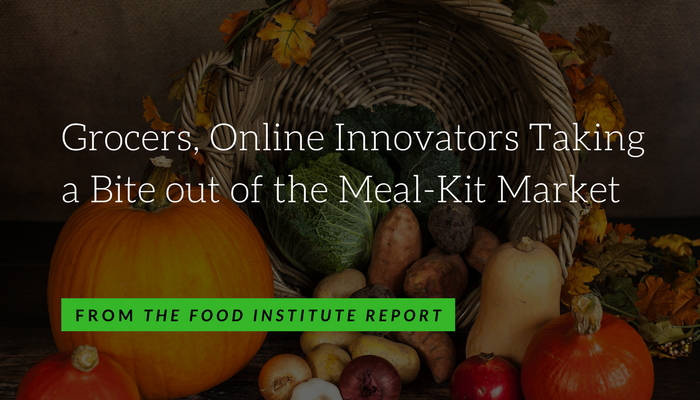 The grocery industry is getting into the meal kit business and further innovating the space.

PCC Community Markets and New Seasons Market are debuting their meal kits at a store in Seattle, WA’s Greenlake Village and, in May, at a location in Seattle’s Ballard neighborhood, respectively. PCC plans to rotate the selection to highlight seasonal ingredients in its stores, and other locations will introduce the meal kits later in 2018, reported Seattle Times (April 11).

While subscription-based services like Blue Apron and Plated that ship meal kits to people’s homes are convenient, some customers are frustrated by the amount of packaging they come with in the form of ice packs and insulation materials. But grocery stores’ meal kits can be taken home and used that night, or ordered online and delivered, with less packaging.

The traditional meal kit model locks people into a regular delivery schedule, and they have been criticized as being pricey, while grocery meal kits offer more flexibility and choice, said PCC chief executive Cate Hardy.

While the pioneers in the space have hit upon something that’s really interesting and appealing to consumers, their model has shown substantial shortcomings, said Neil Stern, a retail analyst and senior partner at Chicago, IL-based retail consultancy McMillanDoolittle. “They’re growing but they haven’t figured out how to make money yet,” he said.

In-store meal kit sales reached $154.6 million in 2017, according to Nielsen. That’s up 26%, but it’s only a small fraction of the $374 billion Americans spent on grocery, dairy and frozen foods in brick-and-mortar grocers.

The meals, which pair Home Chef’s recipes and pre-portioned ingredients with fresh steak, chicken or seafood from Hannaford, are available at 41 of the grocer’s supermarkets in Maine, New Hampshire, New York, Vermont and Massachusetts.

Peapod expanded its meal kit line with its first restaurant collaboration. It launched a partnership with two Lettuce Entertain You Enterprises banners to create three recipes inspired by the restaurants’ dishes.

The new meal kits became available for home delivery in April in the Chicago, New York and Washington, D.C. markets that Peapod serves. The kits, which include Big Bowl and Wildfire chef-inspired recipes, can be added right to customers’ Peapod shopping carts along with other grocery items without a subscription. Since Peapod began in Chicago, partnering with city restaurants was a “natural progression” for the country’s leading online grocer, said Spencer Baird, senior vice president of merchandising for Peapod.

Last, meal kit company Local Crate raised $1.4 million in seed funding to fuel market and channel growth. The company launched its service in Illinois with plans to expand to additional markets and national retail outlets in 2018 and beyond.