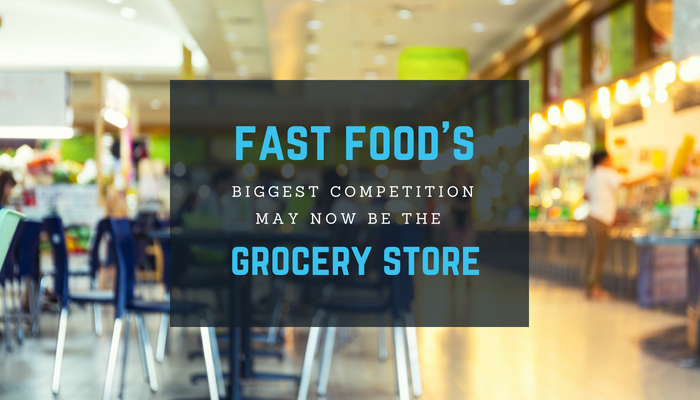 If you've gone to the grocery store lately you've surely noticed the increased importance given to products that make mealtime easier. From pre-cut fruits and vegetables to meal kits to fully-prepared dishes, the supermarket is becoming a major competitor in the foodservice sector.

This "grocerant" movement is likely driven by consumers' ever-busy lifestyles and a need for convenience. A report from the Food Marketing Institute found 65% of Americans usually don't know what's for dinner two hours before mealtime, while 15% frequently consider grocery deli/prepared when unsure about dinner. Seven in 10 shoppers emphasize healthy, nutritious choices when ordering from retail foodservice or restaurants. Many emphasize the importance of options in the deli/prepared foods department, led by healthier ingredients, clean label items and in-store health and nutrition information and/or education.

The report notes retailers face several challenges, such as that consumers lack interest in cooking meals from scratch and retail foodservice is not a top-of-mind destination with 85% of shoppers. However, it says the opportunity for supermarkets lies in combining semi- and fully-cooked items to market as main or side dishes.

It is also becoming more common for retailers to offer full-service or quick-service dining options. H-E-B doubled down on its grocerant efforts by unveiling a new fast-casual concept, True Texas Tacos, which it opened in San Antonio. The location serves breakfast and specialty tacos, reported San Antonio Business Journal (June 20). Other retailers have also amped up their restaurant efforts in recent years, such as Hy-Vee's partnership with Wahlburgers to build, own and operate Wahlburgers restaurants, Kroger's expansion of its new restaurant concept Kitchen 1883, and Whole Foods' additions of a whole slew of restaurant concepts to its locations across the country. Wegman's is one of the major pioneers of the grocerant, offering a kind of food court at most of its stores that houses a burger concept, coffee counter, pizza shop and other counter-service options.

Globally, grocerants are taking shoppers by storm, as well. Les Dames d’Escoffier International, an organization of professional women leaders in the fields of food, fine beverage and hospitality, notes prepared foods, grocerant in-store drinking and dining, and produce are three retail departments expected to generate the most consumer excitement in the coming year. It also predicts Mediterranean, Middle Eastern and Latin American cuisines will have the most influence on the American food scene in the coming year.

In Japan, a number of grocerants have begun popping up as well, as operators look for a way to differentiate themselves. A restaurant in the Seijo Ishii Trie Keio Chofu supermarket offers kuroge wagyu premium beef steak, pasta, curry and hamburgers, reported The Straits Times (May 3). The grocerant, introduced in 2017, is the supermarket operator's first, but it is considering opening more in its other stores. "We expect customers to eat at the grocerant, discover the excellent quality of the ingredients on our shelves and then buy them," said Takashi Igarashi, head of the company's corporate communications office.

This is one of the added benefits of a grocerant, aside from the convenience it offers to consumers. Shoppers have a chance to see how to prepare the food sold in the supermarket and taste the quality first hand. "I feel like these meals are also food samples for a fee," said a frequent customer of Seijo Ishii's grocerant.

In an increasingly competitive market, it is important for retailers to set themselves apart from the rest, particularly if they can't compete on price. Grocerants have emerged as a way to give shoppers a reason to keep coming back to your store, even if they can find the same grocery items at a lower price somewhere else.