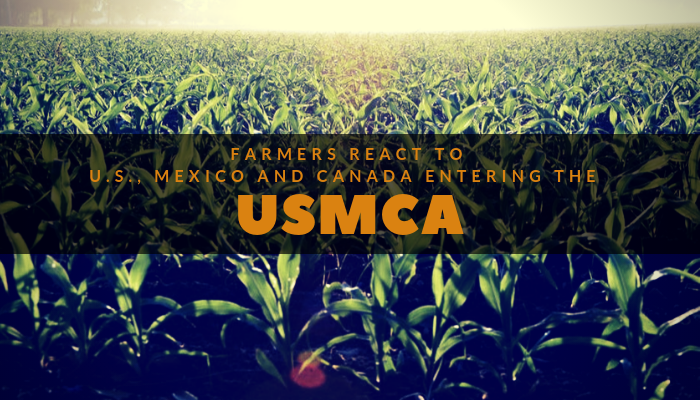 Although Sino-American trade relations remain contentious, U.S. farmers can rest easy knowing an accord for the North American continent has been agreed upon.

The U.S. and Canada reached a deal in the final hour before the North American Free Trade Agreement (NAFTA) was to expire. Canada will enter the United States-Mexico-Canada Agreement (USMCA), that is replacing NAFTA, according to the U.S. Trade Representative and the Canadian Foreign Affairs Minister. The agreement is expected to open markets for farmers, ranchers and businesses across the North American continent, according to the trade officials.

The deal is viewed as a win for both President Donald Trump and Canadian Prime Minister Justin Trudeau, writes Heather Long of the Washington Post, as President Trump was able to secure a major trade deal while Prime Minister Trudeau retained the Chapter 19 dispute resolution mechanism from NAFTA, a major sticking point during negotiations. Additionally, Canada will allow U.S. farmers to sell milk protein concentrates, skim milk powder and infant formula within the country while still protecting other domestic dairy products.

The deal could spur negotiations with China to move more quickly as the U.S. has recently tied up trade disputes with other countries. South Korea and the U.S. signed a renegotiated free-trade agreement. Modified tariffs will allow U.S. agricultural crops better access to South Korean markets, reported Bloomberg (Sept. 24). Additionally, the U.S. and Japan are discussing a bilateral trade agreement, reported Politico (Sept. 27).

In general, farmers and farm groups across the U.S. appear receptive to the deal. This should come as little surprise, considering most groups tracked by the Food Institute indicated that despite its flaws, NAFTA provided them with market access to Canada and Mexico.

Vermont dairy producers were hopeful that the USMCA would open the door to new markets for their products. State officials gave the deal positive reviews, but farmers were reserving judgement until more details were available, reported Wichita Eagle (Oct. 1).

However, Canadian dairy producers were not as optimistic. "We can't compete on a level playing field with those products because their governments have massive subsidies for that, and then in this new deal Canada has been limited to some extent on even how much you can export," said Graham Lloyd, CEO of Dairy Farmers of Ontario. He noted Canada will likely reduce domestic milk production due to this imbalance, reported CBC (Oct. 1).

Additionally, Canada's supply-managed agriculture sectors gave up shares of their protected market in the deal. The country will allow 10 million dozen additional imports of eggs during the agreement's first year, with 1% increases per year for ten years. U.S. chicken and turkey exports into Canada will also increase over the course of the agreement, reported CBC (Oct. 1).

As of press time, there was no official start date for the agreement. However, it appears to be a win for U.S. agriculture, according to those working in the industry.