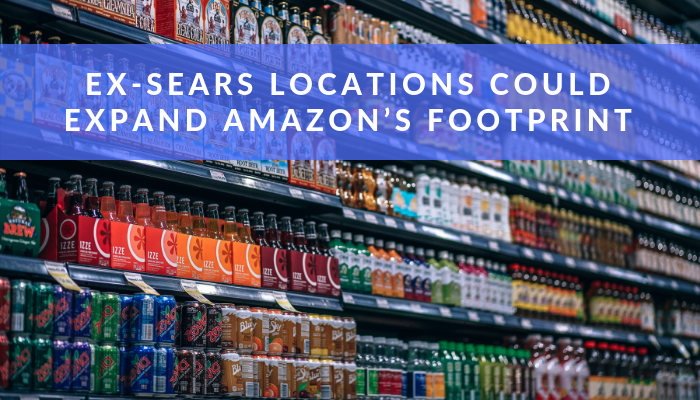 Grocery companies may have interest in the stores left in the wake of Sears' minimization plans, according to a BMO Capital Markets report.

First opened in 1893, Sears, Roebuck and Co. became one of the most important department stores in U.S. history over the course of a century. However, a bankruptcy judge approved a $5.2 billion plan by Sears chairman Eddie Lampert to keep the business open in February after declaring bankruptcy. Although the move preserved about 400 stores, BMO Capital Markets noted some 430 stores will be abandoned by the retailer. About 170 of those are already vacant, with 260 scheduled to close their doors shortly. Additionally, of the 480 Sears/Kmart stores saved by the bankruptcy deal, about 80 are expected to be closed.

BMO expects some of the ex-Sears stores will attract attention from grocery companies looking to spread out, especially Amazon which is looking to expand Whole Foods Markets' footprint. BMO estimated Whole Foods may be interested in about 110 Sears/Kmart locations that fit their "upscale grocer" criteria that are not within three miles of an existing Whole Foods location. Overall, 310 locations fit the agency's "upscale grocer" criteria. BJ's Wholesale Market, Costco, Sprouts, Target and Albertsons have between 14% and 23% of their stores within three miles of these upscale locations.

Additionally, BMO Capital Markets believe Lidl or Amazon, which is reportedly developing a more traditional grocery concept under its own brand, may be interested in about 321 locations that fit its "value grocer" criteria. BMO found Meijer had the highest cross-over with these locations, with 13.6% of its stores within a three-mile radius of one of the locations. BJ's, Costco, Sprouts and Aldi had between 10% and 12% exposure, while Kroger and Walmart were under 8% crossover.

Overall, BJ's, Meijer, Costco, Target, Sprouts and Aldi had between 18% and 27% of their stores within three miles of the 610 locations tracked by BMO. BMO reported that Walmart and Kroger had low exposure to both of the two estimated scenarios, at just 8%.

BMO believes that many of these former Sears/Kmart stores could attract attention from grocery companies as they are surrounded by high quality demographics. BMO estimates that Sears Holdings currently has 137 Tier 2+ assets (representing stores between the 90th and 60th percentile on its proprietary Store Quality Database) and 275 Tier 3+ assets (60th to 30th percentile). BMO noted the Tier 3+ stores would likely be the most sought after by growing retailers, including grocery stores.

While the Sears closures may provide a short-term boon for some grocers looking to sell more hardlines, with Target, BJ's and Costco benefitting the most, there is a longer-term risk that new grocery competition will enter the marketplace via Amazon's new channel or Lidl expansions. The Tier 3+ locations, which BMO expects would be the most attractive to Amazon or Lidl, would be the most likely to find a tenant in the near-term. Sprouts has the most three-mile crossover exposure at 9.5%, followed by Trader Joe's (9.0%), Whole Foods (7.8%), Costco (7.2%) and Target (7.1%).

Additionally, as the construction of new box stores slowed, there are not many construction operators building new box retail spaces. These buildings represent a quick and likely cheaper way for grocers to expand their footprint, and provide landlords with an opportunity to revitalize shopping centers with new, in-demand anchor stores. Specifically, Whole Foods was targeted as a concept that could revitalize fading shopping centers. However, grocers will need to contend with hotels and other retailers who may be eyeing the same prize.