Jan 14, 2019
Why Cannabis is the Hottest Topic in the Food and Beverage Industry
By Jennette Rowan 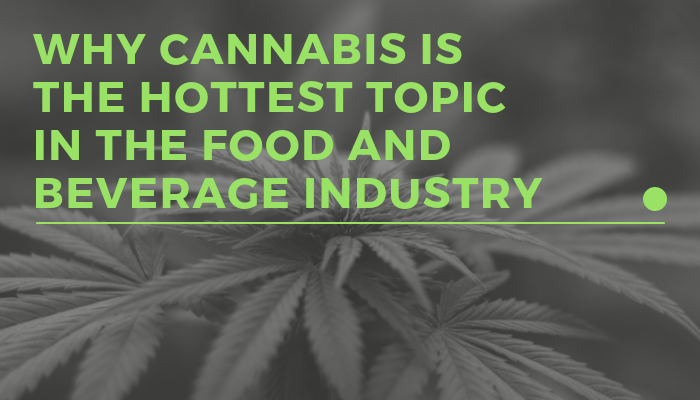 Everyone in the food industry is predicting cannabis will be one of the major trends in 2019. At The Food Institute, we included it in our own trends forecast, as did The Specialty Food Association, Whole Foods Market, FreshDirect, Kind Health Snacks, Restaurant Canada and many others.

But how much do we actually know about this budding (pardon the pun) industry? What will its impact be on the food industry, and what hurdles do food and beverage manufacturers need to overcome if they want to enter the space?

In the beverage sector specifically, there have been numerous rumors of mainstream companies interested in dipping their toes in the cannabidiol (CBD)-infused beverage space. The Coca-Cola Co. is reportedly in talks with Aurora Cannabis about developing cannabidiol-infused beverages, and is said to be particularly interested in drinks that can ease inflammation, pain and cramping, reported Bloomberg (Sept. 17, 2018). This seems to be a common theme in the use of non-psychoactive CBD, as it is emerging as a possible ingredient in functional wellness drinks.

Despite that rumor, though, Coca-Cola Co. still claims it has no plans to enter the CBD space "at this stage," reported Business Insider (Oct. 31, 2018). Walmart's Canadian unit was also believed to be exploring the possibility of selling cannabis-based products, but has no immediate plans to get into the business. A company spokesperson noted "as we would for any new industry, Walmart Canada has done some preliminary fact-finding on this issue, but we do not have plans to carry cannabidiol products at this time, reported CNBC (Oct. 9, 2018).

It's no surprise that companies are wary about getting into CBD-infused products, even where they are legal. Many likely wonder whether they will be well-received by customers, or if it will harm their reputation. They are also likely concerned that consumers don't even understand what CBD is, or if it is safe and/or legal.

Some of those trepidations may be unfounded, though, as a recent AT Kearney study found 41% of American and Canadian consumers would try food infused with cannabis if it becomes legal. In addition, 25% of respondents said their perception of a non-alcoholic beverage company would improve if they became involved in cannabis.

Even though the legality of cannabis-infused products is still a bit of minefield to navigate, we may be getting closer to adoption than you'd think. President Trump signed the Agriculture Improvement Act of 2018 into law in December 2018, which along with extending, expanding and modifying federal agriculture and nutrition programs, also made changes to hemp production laws.

The law alters certain federal authorities relating to the production and marketing of hemp, including removing hemp from the Controlled Substances Act, meaning it will no longer be an illegal substance under federal law. However, FDA retained authority to regulate products containing cannabis or cannabis-derived compounds under the Federal Food, Drug, and Cosmetic Act. FDA plans to better define its public health obligations regarding cannabis-derived products, and reiterated that it is illegal to introduce foods containing added CBD or THC into interstate commerce.

In Canada, where recreational marijuana was recently legalized, the market for cannabis-infused food and drinks is, unsurprisingly, growing at a swift pace. Tobacco company Altria Group plans to take a 45% stake in Canadian cannabis company Cronos for $1.8 billion, as it believes the cannabis industry "is poised for rapid growth over the next decade" and called cannabis "an adjacent category" for its tobacco operations, reported The Wall Street Journal. (Dec. 7, 2018).

This brisk expansion of the industry in Canada foreshadows the potential opportunities for food and beverage companies in the U.S., as more states legalize cannabis and consumers become more comfortable with the idea of cannabis and CBD-infused products. However, there is still a lot to learn about this industry that is just in its infancy.

Before companies can think about entering the space, a more complete look at the market is needed. Join The Food Institute for an introductory webinar on Jan. 31, exploring the CBD-infused food and beverage industry, product opportunities and implementation, consumer adoption, hurdles, and more. Featuring Keith Dolo, president and CEO of Sproutly, a supplier to the cannabis beverage and consumables market, and David Donnan, senior partner at consulting firm A.T. Kearney. Register here: http://food1.co/cannabis-2019.