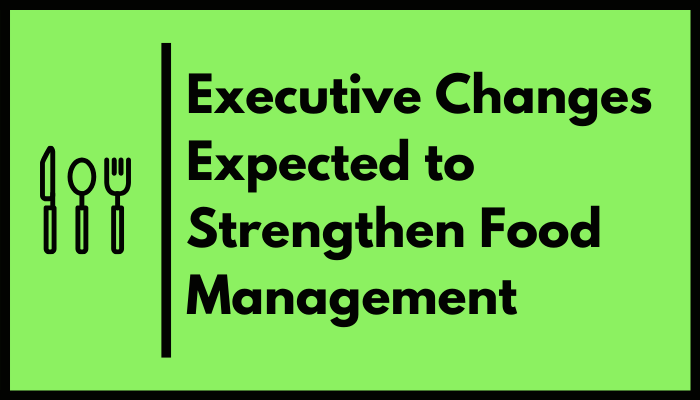 From Sept. 3 to Nov. 12 this year, there were 143 executive changes in the food industry, compared to 157 during the same period in 2018, according to The Food Institute's data.

In that role, he served the business units and franchisees by identifying new ideas and best practices to accelerate their growth. Before joining McDonald's, Kempczinski was EVP of growth initiatives and president of Kraft International.

Walmart named John Furner president and CEO of Walmart U.S., following a successful five years for the business segment under Greg Foran. Furner will report directly to Walmart president and CEO Doug McMillon. Foran, who is taking a role as CEO at Air New Zealand Limited, will stay on with Walmart through Jan. 31, 2020.

Furner started with Walmart in 1993 as a part-time associate in the garden center of a supercenter. He later worked his way up to become a store manager, district manager and buyer. During his career, Furner held leadership roles in operations, merchandising and sourcing in Walmart U.S., Sam's Club and Walmart International. Most recently, he served as Sam's Club CEO.

Additionally, Papa John's appointed industry veteran Jim Norberg as SVP and chief of restaurant operations. Norberg spent more than 30 years of his career at McDonald's. His most recent role was EVP and COO, where he managed operations for 14,000 U.S. restaurants.

Target named Michael Fiddelke EVP and CFO. In this role, Fiddelke will be responsible for financial planning and analysis, financial operations, internal audit, accounting, investor relations, treasury, tax and risk. He will also oversee Target's financial and retail services, which involves guest relations and management of its financial products, including Target RedCard.

Meanwhile, Ahold Delhaize named Natalie Knight to succeed the departing Jeff Carr as CFO, reported Supermarket News (Oct. 22). Plans call for Knight, currently CFO at Arla Foods, to join Netherlands-based Ahold Delhaize as EVP of finance and an executive committee member on March 1, 2020. She then will be nominated as CFO and a management board member by the company's supervisory board at the annual shareholders meeting in April when Carr's current term expires.

Knight served as CFO at Arla Foods, a global dairy company based in Denmark, since 2016. She played a pivotal role in driving the company's transformation and efficiency program, which lowered the company's cost basis. She also led Arla's digital strategy process and helped it progress in the area of sustainability finance.

At Aramark, the company named industry veteran John Zillmer CEO. Zillmer previously spent 18 years at Aramark. Under his leadership as president of global food and support services, Aramark experienced significant growth, ultimately becoming one of the largest food management providers in North America. Following his prior tenure at the company, Zillmer served as chairman and CEO of Allied Waste Industries.