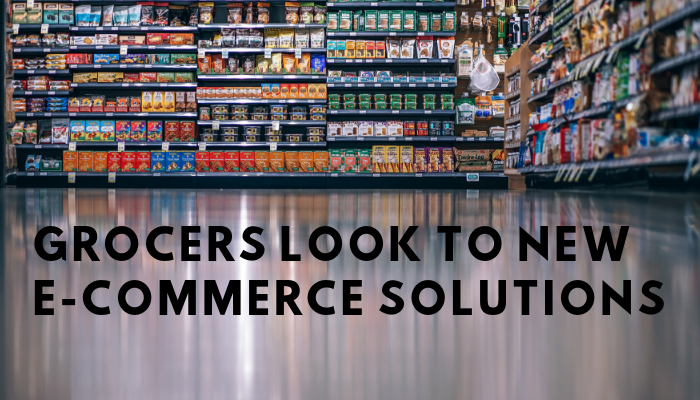 As e-commerce contributes more and more to sales, grocers are turning to new models to get customers their groceries easier and faster than the competition.

Back in May, we learned about how U.S. chain Kroger is partnering with the UK's Ocado. Ocado is an online grocery retailer known for using robots instead of people to process and pack orders reported Reuters (May 17). Kroger CEO Rodney McMullen called the partnership "transformative" and told Reuters how it would accelerate the company's efforts to give customers anything, anytime, anywhere.

Currently, Kroger already offers an online grocery delivery service but orders are filled at individual stores and delivery is handled in-house and by third-party providers.

Ocado and Kroger have now agreed on service and operational terms to the May deal, reported Reuters (Oct. 30). Ocado said the agreement includes how Kroger will order warehouses, also known as Customer Fulfillment Centres (CFCs), and the basis on which Ocado will develop and operate the sites in the U.S.

It is expected that Kroger will order 20 CFCs in the first three years of the deal — the first three being ordered by the end of 2018. Ocado CFO Duncan Tatton-Brown said that the partnership has potential to more than double the initial 20 orders.

On Oct. 30, Albertsons Cos. announced its partnership with Takeoff Technology. With Takeoff's artificial intelligence capabilities it will pilot the micro-fulfilment center concept, making it the first national grocer to implement an automated e-commerce fulfillment solution for its customers.

The fulfillment center will be piloted in an existing store and the machine will be replenished daily, similarly to how the store shelves are stocked frequently. Customers will order using the existing e-commerce interface and the order will be delivered to the automated system. Takeoff will then fulfill the order using AI enabled technology. A system of totes and conveyers will deliver the items to an Albertsons employee who will then prepare the order. This is expected to drastically reduce the time it takes for individual orders to be processed.

Co-founder and President of Takeoff Max Pedro described this as a "win-win" for grocers and customers. "Our e-grocery automation is a turn-key solution that uses artificial intelligence to unlock ultimate convenience for shoppers without need of charging fees or a price premium," he said.

Grocers such as these have been in an ongoing battle for customers with Amazon. "Ocado is a consumer's dream and a competitor's nightmare, and the competitor that's going to get caught in the crossfire is clearly Amazon," said Burt Flickinger, managing director of consultancy Strategic Resource Group.

Supermarkets are worried that Amazon will start transforming existing Whole Foods stores into a grocery delivery network, according to Reuters. It is already offering free two-hour delivery from some U.S. stores for its Prime members.

However, experts say that even Amazon is still trying to figure out the right model. "They're working their path to the customer in two different ways, from very different starting points," said Tom Furphy, former VP of consumables and AmazonFresh and now CEO of Consumer Equity partners, said of Kroger and Amazon.

E-commerce accounts for 7.5% of sales of packaged consumer goods in Britain — which was one of the first to see a widespread adoption of online grocery shopping — compared with 1.5% in the U.S, according to Kantar World Pannel. It predicts the U.S. will rise to 8% by 2025.

Some analysts and grocers question whether a model such as this will work in the U.S. market due to our much more dispersed population compared to a densely populated Britain.

According to Kroger executives, the deal will be beneficial even if the U.S. delivery demand fails to materialize. Currently, Kroger employees tend to go back and forth between in-store shopping, pickup and delivery. The Ocado warehouses will be able to assemble orders for the stores ClickList curbside service, lowering costs and freeing up employees.