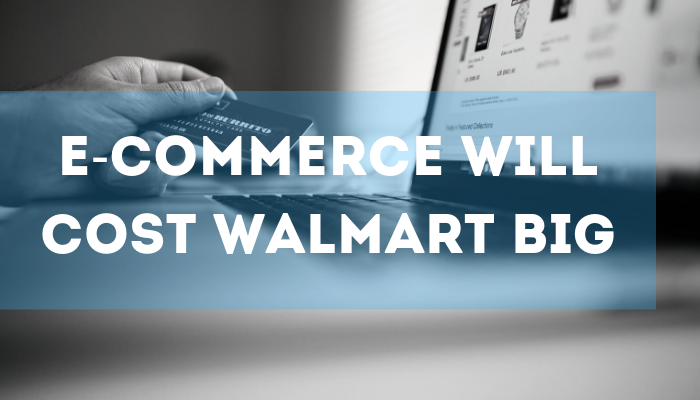 Walmart expects to lose more than $1 billion in its U.S. e-commerce operations in 2019, according to people familiar with the matter, reported Recode (July 3).

Three years ago, Walmart agreed to a $3.3 billion purchase of Jet.com. At the time, CEO Doug McMillon was convinced Jet founder and CEO Mike Lore was the one who could close the company's gap between itself and Amazon.

In 2018, Walmart's U.S. online sales increased 40%, supported heavily by a successful expansion of an online grocery business. However, it's still far behind Amazon and tensions are reportedly rising within the company.

Increased pressure is being applied on Lore and his online business. He has aggressively pitched the company's management and board on the idea that Walmart needs to spend billions a year on new warehouses in order to compete with Amazon, sources say. Amazon has 110 fulfillment centers in the US, while Walmart has about 20.

Walmart has mostly rejected Lore's propositions. However, the company is expected to sell at least one of the three digital fashion brands to free up cash for investing in more warehouses and fulfillment centers.

The executive team that leads Walmart's physical stores in the U.S. is reportedly becoming frustrated by some of the money losing initiatives, and sources say its leader is upset by the credit Lore's division gets in the media for the success of Walmart's growing online grocery business.

By the end of this year, Walmart will offer grocery pick up from 3,100 stores across the U.S. and same-day grocery delivery from 1,600 stores. Additionally, the company is launching its own grocery delivery subscription service called "Delivery Unlimited."

Amazon currently accounts for nearly 38% of online retail in the U.S., up from 32% in 2016, according to an estimate from eMarketer. Meanwhile, Walmart accounts for just 4.7%, up from 2.6% three years ago.

Walmart added more than 2,000 new brands to its website over the past year, in part through acquisitions of online specialty retailers."It's taking longer than I thought it was going to," said McMillion. "And I have been surprised at just how many brands there are out there to get signed up. ... Who knew we needed 2,000 of them. I didn't." Despite these additions, there is still a large online selection gap between Amazon and Walmart.

On the bright side, Walmart was named the top retailer in the National Retail Federation's (NRF) 2019 Top 100 Retailers tally. It was followed by Amazon and Kroger, with Costco and Walgreens Boots Alliance rounded out the top five.

"Three or four years ago it was head-to-head. Now Walmart is more confident doing what they are doing," said Dave Marcotte, SVP cross industry, cross border and technology at Kantar. "Except for groceries and seasonal items, Walmart is comfortable being the alternative."

The list represents stability in the industry, according to NRF. The top ten companies are the same as 2018, with the only changes being six companies swapping positions with each other.