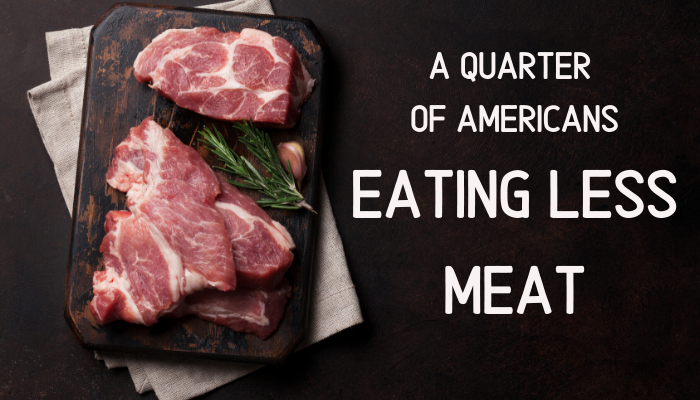 Seventy-two percent are eating the same amount of meat, while just 5% report eating more meat this year than in the past. When asked how often they eat meat, two in three U.S. adults reported eating it "frequently," while 23% eat meat "occasionally," and 7% "rarely" eat it. Just 3% report never eating meat.

Certain groups are more likely than others to have eaten less meat in the past year. Women are about twice as likely as men to have cut down on meat, while non-Caucasians report having reduced meat in their diets at a higher rate than Caucasians.

As for what meats are the most consumed, USDA data shows chicken gained popularity, becoming the top consumed meat in recent years. For most of the 1900s, pork and beef were the most popular.

The U.S. regularly ranks among the top countries for meat consumption as just 5% of Americans consider themselves to be vegetarian. This rate remained relatively steady over the past 20 years, proving that Americans' reports of eating less meat don't necessarily mean vegetarianism is on the rise.

The biggest factor in reducing consumption is health concerns, with nine in 10 saying it is a major or minor reason they are cutting back on meat. Following health is environmental concerns with seven in 10 indicating concerns about the environment are their reason behind avoiding meat.

Other reasons included worries about food safety and animal welfare, convenience due to other family members' eating habits, and religious reasons.

The most cited way of cutting back on meat is by simply eating smaller portions of it. Other methods include altering recipes by substituting vegetables or other ingredients for meat. Thirty-six percent of those reducing meat consumption eat meat replacements such as plant-based burgers or sausages.

The momentum behind these types of products could be accelerating a reduction in meat intake, Gallup noted. Plant-based options are more readily available at restaurants and more varieties are sold in supermarkets as the trend progresses, making it easier for those evading meat.

For example, The Habit Restaurants Inc. plans to test a plant-based burger from Impossible Foods in the second half of 2020, reported Reuters (Jan. 24). Habit joins others such as KFC and Pizza Hut, which ran short tests last year of plant-based chicken nuggets from Beyond Meat and a plant-based sausage topping called Incogmeato from Kellogg Co’s Morningstar Farms.