May 11, 2018
Diners Want Their Meal Delivered, and They Want It Now
By Jennette Rowan 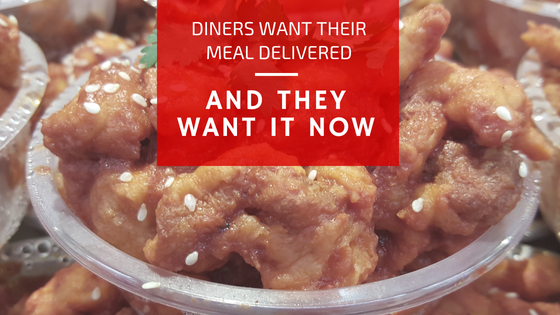 The entire food industry is faced with the need to increase its technological innovation, from manufacturing to retailing to foodservice. Many of the hot topics of conversation in the Food Institute Blog revolve around tech, whether it's e-commerce grocery, AI integration or food processing automation. But one of the sectors most impacted by new tech is foodservice, and more specifically delivery.

Consumers have become accustomed to delivery in every part of their lives, with the ability to click a button one minute and have an item in their hands the next. Amazon Prime certainly was a major contributor to the emergence of this trend, forcing other retailers to implement similar two-day, one-day and even one-hour shipping programs. However, while delivery in foodservice has been around much longer than grocery delivery, it is becoming more important for restaurants of all sizes to have delivery programs, and to innovate to stay ahead of the competition.

Fast casual chains, which traditionally are geared towards in-store and takeout orders, have begun to realize that consumers expect delivery from them as well.

Panera Bread expanded its delivery service nationwide, with the program now available in 897 cities and 43 states. Digital sales at Panera, which consist of online, app and kiosk orders, represent 30% of total company sales. While many chains are using third-party services like UberEats or GrubHub, Panera aims to employ its own delivery drivers in every market, which contributes to the company's ability to scale and expand its delivery business.

Bojangles Inc. also plans to test delivery in the Charlotte, NC, market, although it will partner with a third-party service, reported Seeking Alpha (May 9). The company's CEO notes it is employing "more aggressive efforts to create a platform that will work for both company and franchise restaurants." It is currently focused on offering larger orders, but plans to expand to include the full menu in the future.

It seems introducing delivery is not just a good idea in theory, but also in practice. Chipotle reported a nearly 700% increase in delivery orders followings its partnership with DoorDash. The partnership expanded delivery availability to more 1,500 Chipotle restaurants, its largest partnership to date. Chicago, IL, Dallas, TX, and Denver, CO, saw the most deliveries, and the most frequently ordered items nationwide were burrito bowls, burritos, and chips and guacamole.

However, that kind of expansion does not come without making some concessions. Chipotle notes it added second make-lines to many locations, which are dedicated to fulfilling online and digital orders. The second line is separate from the customer-facing line, which enables workers to prepare digital orders with no disruption to in-store customer orders.

With this increased interest in delivery also comes new technological innovations to make the process quicker and more efficient. Uber plans to test food delivery by drone in San Diego, CA, after the federal government approved a commercial test program. The U.S. Transportation Department chose 10 state, local and tribal governments, as well as select companies, including Uber, to work together on commercial drone testing, reported Bloomberg (May 9). Touching on the importance of speed to consumers, Uber's CEO noted people should expect meal delivery in five to 30 minutes, depending on whether it comes from a drone or a human.

Other tech has also begun to emerge to allow faster and less expensive deliveries. Rolling robots are slowing gaining approval to operate in select cities across the U.S. The latest is Washington, DC, which recently passed legislation to permit the large-scale deployment of delivery robots across the city, reported Washington Business Journal (May 7). However, actual adoption of the tech may be a bit slower, as Starship Technologies, the company involved in crafting the initial law that allowed it to pilot 2-ft. tall robots in 2016, is the only company that has taken advantage of the rule so far.