Dec 2, 2019
Demand Cuts Bread in Half, Literally
By Victoria Campisi 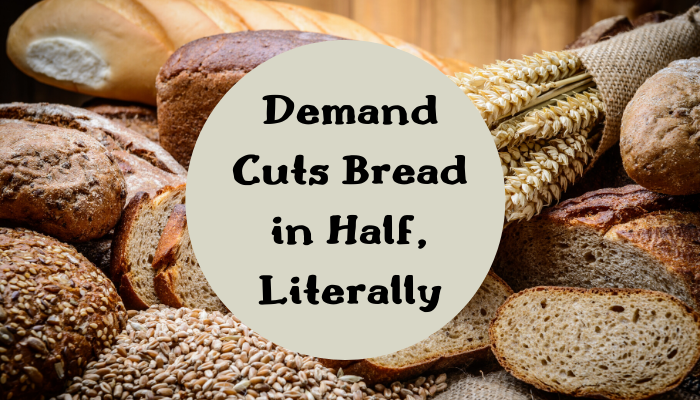 Smaller loaves of bread are on the rise, reported The Wall Street Journal (Dec. 2).

This comes in response to new demands from shoppers who complain they can't finish an entire loaf before it turns stale. Others prefer to buy half loaves more frequently so they are eating the freshest bread possible.

Additionally, smaller loaves are better for those who are trying to cut back on calories, carbohydrates or gluten and for people who live alone - a growing demographic that comprises about one-third of U.S. households.

Younger consumers in particular are focused on their bread consumption because they don't like wasting food. The American Bakers Association found nearly three-quarters of Gen Z and Millennial consumers are bothered by wasting bread and more than one in five of these consumers skip buying bread on their next grocery trip after throwing bread away.

The organization's survey also found more than half of these consumers would buy more baked goods, including bread, if they came in smaller portions. Demographic and cultural shifts will likely push more of the bread industry to develop smaller loaves in coming years, according to Robb MacKie, CEO of the American Bakers Association.

However, making this change is complicated and costly for giant players whose current operations can produce thousands of loaves per minute. Large-scale bread makers would need to buy new plans and calibrate dough dispensers and packaging capabilities. "It's doable, but you can't flip a switch and do it overnight," MacKie said.

Demand for smaller sizes keeps going up at Hy-Vee, according to the chain's VP of deli and bakery, John Griesenbrock. The grocery sells half loaves of bread, demi-baguettes, small focaccia loaves and packages of four hamburger buns. "Customers want options," Griesenbrock said.

For years, Lunds & Byerlys split loaves in half for shoppers who asked at the bakery counter. Requests kept increasing so in 2018 the company began packaging half loaves of its multigrain, sourdough, pumpernickel and "superior-seed" breads.

The loaves are sold at a slight premium per slice because of added labor and packaging costs. These four varieties outsell their eight full-size counterparts, accounting for 54% of overall sales. "People would rather pay more by the slice for a smaller loaf than take a larger-size loaf and let it mold on their counter," bakery director Amy Foulks said.

These loaves also have more shelf appeal, according to Foulks. When loaves are split down the middle, shoppers can see the plush insides, which are often packed with seeds, cranberries and walnuts.

Meanwhile, Dave's Killer Bread launched "thin-sliced" loaves, which are about an inch narrower and more thinly sliced than the full-size line. These loaves attracted new consumers to the brand as smaller loaves appeal to smaller families and people on a health kick, according to brand manager Cristina Watson. Budget-conscious shoppers are also drawn to its lower suggested retail price of $5.29, compared to $5.99 for the full loaf.