Mar 6, 2020
Delivery Accelerates Due to Coronavirus
By Victoria Campisi 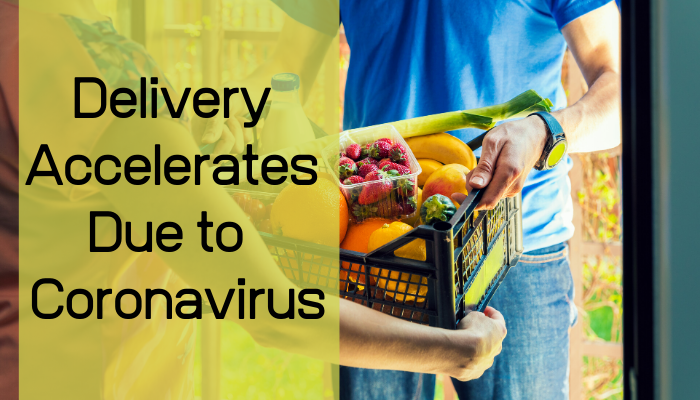 Online shopping and delivery are expected to surge as cases of coronavirus increase in the U.S., reported Seattle Times (March 3).

Coresight Research found 27% of surveyed U.S. internet users were already avoiding public places in February, with 58% saying they would do so if the outbreak worsened, providing an opportunity for grocery delivery.

Instacart is launching its door-step grocery drop-off service in response to a surge in consumer demand amid fears of the coronavirus spreading in the U.S., reported Reuters (March 5).

The service gives customers the option to have groceries left at their doorstep at a designated time instead of being hand-delivered. "Over the last week, we've observed increased consumer adoption for a new 'Leave at My Door Delivery' feature," the company said.

Sales jumped 10-fold and as high as 20 times in California and Washington-where the virus has been most widespread in the U.S.

Additionally, Uber's food delivery business will likely benefit from the epidemic, despite its ride-hailing business taking a small hit, reported Reuters (March 4). "Certainly our rides business, to the extent that people stop leaving their house, will take a hit, while our business Eats will probably actually benefit," said Uber CEO Dara Khosrowshahi.

Meanwhile, UBS believes Costco is best positioned to handle increased demand, particularly due to its recent investments in grocery delivery. Costco is expected to gain sales and market share as shoppers stock up on essentials in anticipation of a wider outbreak. UBS projects a 9% increase in Costco's U.S. same-store sales in February, compared to 6.9% in January, reported Business Insider (March 3).

"Even if its in-store sales ultimately face some pressure, we believe Costco is well positioned to make up much of this on the back of its recent investments in omni-channel," said UBS analyst Michael Lasser. "This includes its nationwide home delivery for non-perishable items, as well as fresh grocery through third-party providers like Instacart."

Despite strong demand for basic foods like dairy products amid the coronavirus pandemic, the milk supply chain is experiencing disruptions that are preventing farmers from getting their products to market, reported  read more

To make up for loss of restaurant sales, some restaurants are turning to retail operations. Restaurants are bundling in-demand consumer products with food and drinks to reach out to their communities, reported CNBC (April 2). Stockpiling left some shoppers unable to find goods like toilet paper and cleaning supplies, but restaurants have...