Aug 7, 2018
Data Breach Costs Are on the Rise
By Chris Campbell 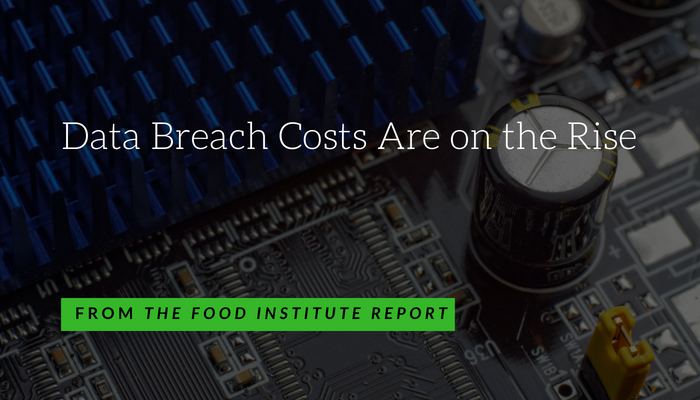 The average cost of a data breach rose 6.4% year-over-year to about $3.9 million in 2018, according to research sponsored by IBM Security and conducted by the Ponemon Institute. The average cost for each lost record rose to $148 from $141, an increase of 4.8% from 2017, while the average size of data breaches increased 2.2%.

The average global probability of a material breach in the next 24 months was 27.9%, an increase over 27.7% last year. South Africa was most likely to experience a data breach, at 43%, while Germany was least likely to, at 14.3%.

Turkey, India and Brazil have much lower costs per record at $105, $68 and $67, respectively, while companies in Brazil had the lowest total average cost, at $1.24 million.

Retail had a cost of $116 per breached record, which was on the lower end.

In the U.S., a malicious or criminal data breach cost $258 per compromised record.

Two new factors are included in this year’s cost analysis - deployment of an artificial intelligence platform (AI) as part of a security automation solution and the extensive use of Internet of Things (IoT) devices. The deployment of an AI platform reduced cost by $8 per record, while the extensive use of IoT devices increased cost by $5 per record.

In the 2018 study, the cost ranged from $2.1 million for incidents with less than 10,000 compromised records to $5.7 million for breaches of more than 50,000 records. Each year, the findings show a consistent relationship between cost and size of the data breach.

For the 477 international firms that took part in the study, the global average churn rate was 3.4%, up slightly from the 3.2% average customer loss in 2017. The researchers noted that companies in countries with high churn rates can significantly reduce the costs of a data breach by emphasizing customer retention activities to preserve reputation and brand value.

In addition, certain industries were more vulnerable to customer loss. Retail averaged 2.1% customer loss as a result of data breaches.

U.S. firms pay the highest cost for lost business. In 2018, the U.S. had $4.2 million in lost business, which researchers note is due to consumers having more options, making their loyalty harder to preserve. In addition, current notification laws make consumers more aware of data breaches,

The U.S. had the highest indirect costs, at $152 per record, followed by Canada, at $116, which are related to the allocation of resources, such as employees’ time and effort to notify victims and investigate the breach.

It takes an average of 221 days to identify malicious and criminal attacks, and 81 days to contain them. Data breaches caused by human error take just 174 and 57 days, respectively. Once a data breach takes more than 100 days to identify, the estimated cost rises by $1.1 million to a total of $4.2 million. Tools that heighten detective or forensic capabilities can significantly reduce data breach cost, researchers noted.