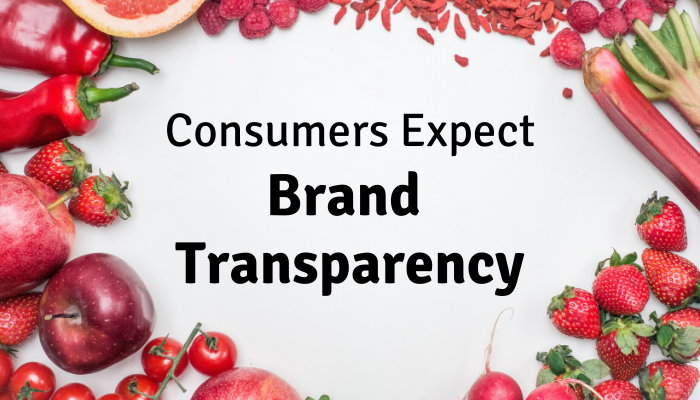 Today's consumers are seeking transparency in the foods they buy, as well as in how they are produced, according to Rabobank's Talking Points—Dear CEOs.

The company asked its readership, "What single piece of advice would you give to the CEO of a big food company on how to respond better to today's consumer?" Embracing transparency and regaining trust were among the top responses.

When it comes to food, consumers don't want companies to be "secretive and opaque." CEOs should consider the implications of what greater transparency will bring in terms of empowering consumers and other stakeholders to engage with food companies about "what they do, how they do it and why they do it." This was considered important not just in terms of greater accountability, but also because today's consumers "want to own the brand as much [companies] do."

Transparency will help win over and maintain Millennial and Gen Z consumers in particular. A survey from ROI revealed 78% of consumers trust transparent brands more, climbing to 83% when looking at Millennial moms. Additionally, 86% of Millennial moms are willing to pay more for a product that offers complete transparency.

Eighty-five percent of respondents in a 2018 survey by Sprout Social said a business' history of being transparent would even make them more likely to give it a second chance after a bad experience. The same survey revealed transparency from businesses is more important than ever before to 86% of Americans, and 46% attribute this to social media.

More than half of consumers are likely to consider brands that are transparent on social for their next purchase. A lack of transparency on social leaves 86% likely to take their business to a competitor.

For example, Silver Fern Farms, a New Zealand-based red meat producer, will add a QR code on its packaging as part of its traceability program, allowing consumers to track where the meat comes from and the quality of its environment. The rollout of the full QR code traceability functionality will be completed in early 2020.

Additionally, many of Rabobank's survey respondents called trust out separately from transparency, indicating one of the biggest issues in business is the erosion of a consumer's trust. One respondent advised CEOs to invest in trust building with "as much rigor and focus as brand building," requiring CEOs to "bring creativity, energy, resources and focus on building trust in meaningful ways."

The survey also suggested CEOs should "establish and build brands that are forward-thinking, progressive and innovative" because consumers are more likely to buy brands that make them feel good to support and want to be a part of something larger than themselves. One way to achieve this is to solve big problems that smaller startups can't.

An example is PepsiCo's "Smiles" campaign, which features 31consumer selfies and their personal stories on the packaging of Lay's potato chips. The campaign was initiated in Feb. 2018 after PepsiCo decided to partner with charity group Operation Smile, which provides surgeries to children suffering from cleft lip or cleft palate, reported Forbes (July 25). Proceeds from sales of campaign packaging went into a $1 million donation to Operation Smile.

Another finding from Talking Points was executives should be innovating faster and taking more risks. One respondent pressed CEOs to revisit their innovation strategies because "it is probably not a true innovation strategy, but rather at best a good strategic intent."

Overall, the readership felt there was "still work to do," agreeing that, to varying degrees, food companies can be out of touch with consumers and need to shake things up. Some thought this was because "big CPG food companies are blind when it comes to the meaningful type of changes they must make if they want to be around in the next decade," while others thought it was because companies "lack solid strategies" and a clear vision for the future.