Dec 13, 2018
Why Consumers Would Rather Eat at Home
By Victoria Campisi 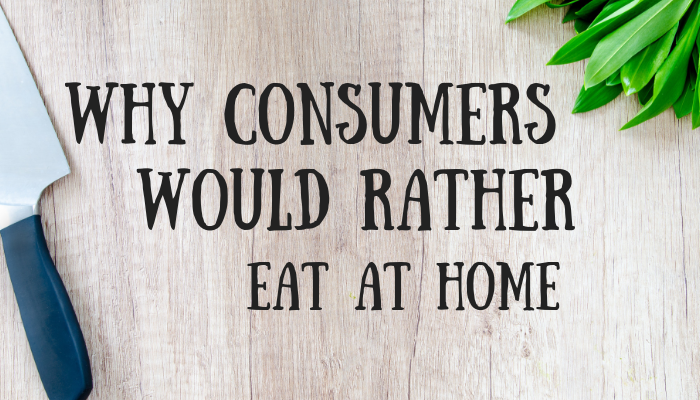 Americans are increasingly choosing to eat at home, even if they aren't cooking the meals themselves.

The Annual Meal Planning Survey from PeaPod revealed that 77% of Americans say they would rather eat a homemade meal than go out for dinner. Forty-three percent said they plan on cooking more in 2019 — and when it comes to Millennials, that percentage is even higher, at 59%.

Why? More than three in four respondents prioritize cost savings and half said eating healthier was more important to them. Additionally, 41% said eating at home offered more quality time at home with family, Millennials again showing the most interest (48%).

Weekdays are when most are likely to make a home cooked meal, with Wednesdays being the peak day (75%). Wednesday is also the most popular day for respondents to use a meal kit.

Over half of respondents said they intend to cook healthier meals in 2019, with one in two looking to use more fresh ingredients and 51% looking to consume fewer processed foods in the new year.

Younger respondents were more likely to express interest in trying new things, with Millennials having the highest intentions to try products such as jackfruit, tofu, paleo products and keto products over the national average.

More than anything, Americans are looking to keep meal preparations easy. Nearly half of all adults surveyed plan to take advantage of at least one of the following in 2019: click-and-collect grocery shopping, home grocery delivery and/or meal kit delivery.

However, even those who opt for a restaurant meal are now more often choosing to eat it at home. In the year ending September 2018, dining at a restaurant represented 37% of all visits and remained flat compared to last year and restaurant meals consumed at-home accounted for 32% of all tragic and increased visits by 2%, reports The NPD Group.

"Home is where the heart is when it comes to U.S. consumers but they still look for the convenience that is offered by a ready-made restaurant meal," says David Portalatin, NPD food industry advisor and author of Eating Patterns in America. "We don't look for this trend to change anytime soon and operators and foodservice manufacturers can take advantage of the stay-at-home movement by offering at-home eaters with innovative ready-to-eat meal solutions and a greater degree of convenience."

Seventy-one percent of those who chose to eat at home were already at home. Adult, single person parties with higher incomes of $100K or above are driving up the majority of restaurant meals eaten at home. Families and groups of five or more make up 31% of foodservice meals eaten at home, according to NPD's ongoing foodservice market research, CREST.

Dinner represents half of all at-home occasions, but morning meals and lunch showed the strongest growth in the period. Fries, burgers and pizza were among the top menu items eaten at home from quick service restaurants and Chinese/Asian/Indian, rice and fries were at the top from full service restaurants.

Of course, food delivery apps such as Postmates and Uber Eats are making it even easier for consumers to eat their favorite restaurant meals from the comfort of their own homes.

Postmates even built a delivery robot with eyes and turn signals that can make a dozen deliveries on a single charge, reported Tech Crunch (Dec. 13). In October, we learned that Uber Eats plans on expanding to 70% of the U.S. by the end of this year — up from the 50% it was already covering, reported CNBC (Oct. 23).

Developments like these allow those who work from home, those who don't want to face the crowds and even those in the middle of a Netflix binge to have menus from hundreds of restaurants at their fingertips and without even having to leave the house to pick them up.