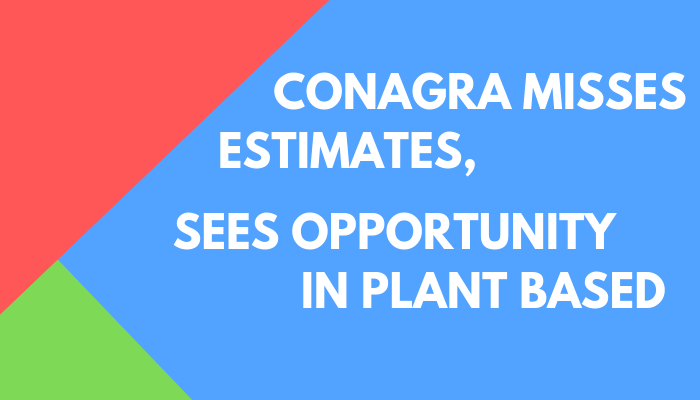 Conagra is seeking growth in plant-based alternatives to meat as it struggles with decreased sales and earnings in the last quarter.

The company missed Wall Street estimates for quarterly earnings and sales as rivals stepped up promotions and lowered prices, cutting into demand for its products, reported Reuters (June 27).

The Chicago-based company expects another inflationary year, driven by increased costs for raw materials such as pork amid the African swine fever outbreaks.

Conagra raised prices for its Hunt's canned tomatoes in 2018 after tariffs and strong global demand drove steel costs up by double-digits resulting in price gaps simply too wide for consumers to ignore, resulting in volume lost, said the company's CEO Sean Connolly.

"In our Hunt's canned tomato business, our pricing actions translated to shelf-price increases," he said.

Previously a bright spot for the company, it's refrigerated and frozen business sales declined 0.6% to $687 million, partly due to lower demand and a P.F. Chang's recall.

"Conagra's growth momentum in the frozen category appears to have started to taper off," Bernstein analyst Alexia Howard said. "This seems to have coincided with Kraft Heinz's heavy promotion in frozen products."

Conagra beefed up its frozen food portfolio with the acquisition of Pinnacle Foods in 2018, adding healthy products from brands Gardein and Birds Eye. "It might take longer than we thought for Conagra to normalize as management adjusts its business to the Pinnacle acquisition and fixes its shorter-term issues," Edward Jones analyst John Boylan said.

Additionally, the company's P.F. Chang's, Dukes and Peter Pan brands were hit toward the end of the quarter by manufacturing challenges. Sales were weakened even further by the divestment of its Wesson oil business and the impact of foreign exchange.

Net sales rose 32.9% to $2.6 billion, mostly due to the acquisition of Pinnacle Foods which was completed in October, 2018. However, it missed expectations of $2.66 billion. Net sales of the grocery and snacks business—its biggest after Pinnacle—fell 7.1%.

Connolly said the company looked at plant-based alternatives to meat as well as almond milk as an alternative to cow's milk, finding that big business could await the company in this category. '"That means the opportunity here could be in the range of $30 billion just in the U.S.," he said. "And you know, there's even more opportunity internationally."

Though plant-based burgers have been the most talked about, Conagra's chicken sales are growing fastest among consumers, up 26% year-over-year compared with 11% growth in beef and fish, and 9% growth in pork. Altogether, Conagra says meat alternatives are an $800 million business, up 22% from a year ago.

"Our view is that the relative size of animal protein consumption serves as a useful guide for how to think about the market opportunity for plant-based alternatives," said Connolly. "As you can see, burgers are important but this market extends well beyond beef patties or even beef."

"Gardein's current burger platform is underdeveloped and we're in the process of creating the next generation of beefless burger to better compete in this popular segment," noted Connolly. "As we do this, we expect accelerated growth at retail and in food services. But we also plan to compete across the important hot dog and sausage categories."