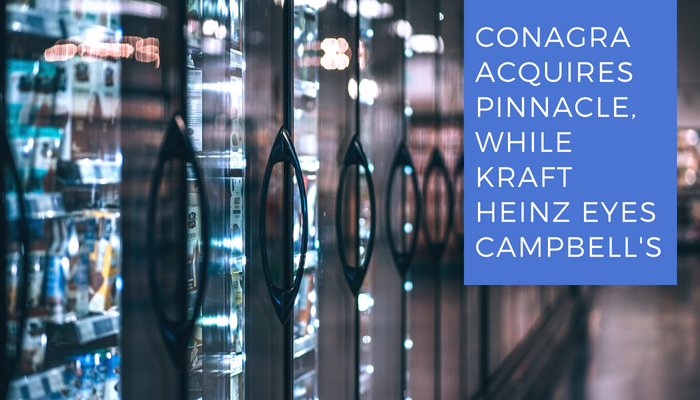 Call it the shot heard across the packaged food world: Conagra Brands Inc. will acquire Pinnacle Foods for approximately $10.9 billion in cash and stock. The transaction is expected to enhance Conagra's multi-year transformation plan and expand its presence and capabilities in its most strategic categories, including frozen foods and snacks.

"The acquisition of Pinnacle Foods is an exciting next step for Conagra Brands. After three years of transformative work to create a pure-play, branded food company, we are well-positioned to accelerate the next wave of change," said Conagra president and CEO Sean Connolly. "The addition of Pinnacle Foods' leading brands in the attractive frozen foods and snacks categories will create a tremendous opportunity for us to further leverage our proven innovation approach, brand-building capabilities, and deep customer relationships. With greater scale across leading, iconic brands, an unwavering focus on driving profitable growth, and a strong balance sheet and cash flow, we are creating a tremendous platform to drive meaningful shareholder value."

"The synergies in both companies' frozen food businesses, including Birds Eye and Healthy Choice make this a logical move as the frozen aisle is in the midst of a resurgence," said Food Institute President Brian Todd in an email to Food Dive. "The convenience and more healthy offerings in this segment have made it more appealing to Millennials and other consumers."

The move comes as frozen foods regain favor with consumers, and the two companies were already poised for growth. Frozen food brands have found new popularity among health-conscious shoppers by adapting to current tastes as frozen food sales rose 1.4% in the year through March 31, compared to zero growth the prior year, according to Nielsen, reported The Wall Street Journal (June 7). Specifically, Pinnacle Foods' frozen product sales jumped 7.5% in the first quarter 2018, and Conagra's refrigerated and frozen food sales increased 2.6% during the time frame. The combination of the two companies will provide opportunities to capitalize on trends in frozen foods.

However, Conagra isn't the only company active in the packaged foods space.

Kraft Heinz is reportedly interested in buying Campbell Soup Co., according to people familiar with the matter. Campbell's is currently reviewing its strategic plans and portfolio composition and plans to discuss the outcome in late August. Sources claim General Mills may be interested in Campbell's as well, reported New York Post (June 22).

However, analysts are not so sure that the pairing of Kraft Heinz and Campbell's would be a positive.

J.P. Morgan Chase analyst Ken Goldman echoed a similar sentiment. "If Kraft were to be interested in Campbell, we think it would be almost purely from a financial perspective," said the analyst, noting the company would be "taking on an awful lot of risk" in acquiring Campbell's Soup. However, Goldman noted many of Campbell's brands were iconic, which could spur Kraft to make a deal, reported CNBC (June 25).