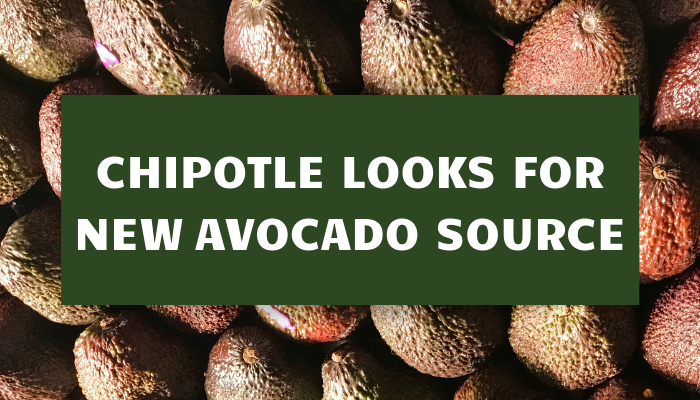 As avocado prices are rising in the U.S., Chipotle Mexican Grill is looking for new sources of supply, reported Bloomberg (July 24).

"The whole country seems to be in love with the avocado," said CEO Brian Niccol. "We're continuing to work in our supply chain to hopefully not have such big swings."

The company still gets most of its avocados from Mexico, the world's biggest producer of the fruit, but now looking at sourcing more from California, Chile, Peru and Colombia to reduce its dependence on Mexico, according to Niccol. "We're starting to really reach out to folks in all these different places that are really starting to develop a stronger system to provide great avocados," he said.

Improved supply in California in recent weeks is taking the pressure off Mexico to provide the main ingredient for guacamole served in U.S. restaurant chains, said David Magana, a senior analyst at Rabobank, reported Bloomberg (July 24).

The increases are caused by where we are in the growing season and a tightened supply, which is controlled by producers, according to industry experts, reported Austin 360 (July 15). Some restaurant operators are raising the prices of dishes, while others swallowed the extra cost or removed the fruit from their menu entirely.

In some cases, restaurants are even serving fake guacamole made from a Mexican squash called calabacitas, reported Food & Wine (July 23). Guacamole that appears more watery and thin is a sign that it could contain the squash, rather than avocados. However, the fake guacamole reportedly tastes almost identical to the real thing.

Food costs at Chipotle rose last quarter, partially due to the higher avocado prices. However, customers have been willing to pay more as same-store sales jumped 10% in second quarter 2019.

During the quarter, marketing and promotions resonated well with customers along with efficient delivery economics driven by allocation of marketing dollars to drive brand awareness and the recent loyalty program rollout and delivery, according to Piper Jaffray.

One thing Chipotle will not be doing is adding Beyond Meat or Impossible Foods products to its menu, reported Fox Business (July 24).

Niccol spoke with the makers of Impossible Foods and Beyond Meat, but ultimately decided not to add the plant-based protein to Chipotle's menu because it didn't follow the company's strict food quality standards. The plant-based meat was still processed food and adding it would go against the chain's motto "Food with Integrity," he said.

Chipotle prides itself on "sourcing the very best ingredients it can find and preparing them by hand." It was the first fast food chain to eliminate GMOs from its ingredients.

The chain will continue to serve vegetarian options such as its "sofritas," which are made out of tofu, and is reportedly testing out new menu items such as quesadillas and carne asada.

In The Food Institute's recent webinar "Achieving a self-sustaining business model: Top 3 trends companies need to think about post-COVID-19," Greg Wank, CPA, CGMA, partner and leader of Anchin's food and beverage group, as well as David Eben founder and CEO of Carrington Farms, discussed how to have a more successful business while burning less capital and attaining self-sustainability. The following summarizes the salient points highlighted...