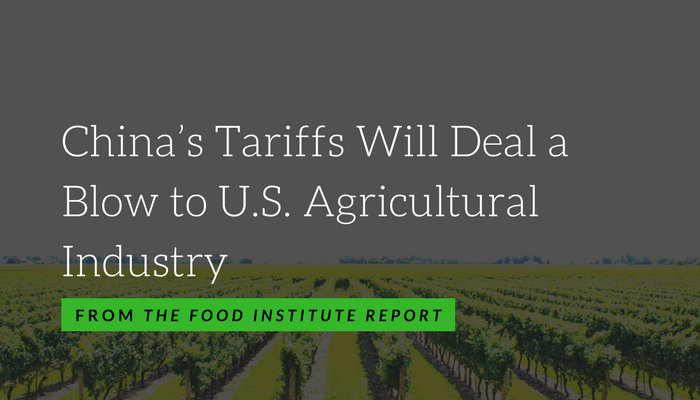 An escalated trade war between the U.S. and China is set to heavily impact the U.S. agricultural industry.

In response to the U.S. releasing a proposed list of Chinese exports subject to additional tariffs of 25%, China will impose additional tariffs of 25% on 106 U.S products, including soybeans, corn, beef and orange juice, worth $50 billion, reported China Daily (April 4). The date of implementation will depend on when the U.S. government imposes the tariffs on Chinese products.

Iowa's already struggling agricultural economy will be further crushed with up to 25% in additional tariffs from China on pork and other products, reported Des Moines Register (April 2). Iowa is a leading national producer of corn, soybeans, pigs, cattle and eggs. China purchased about $1.1 billion in U.S. pork last year, according to the U.S. Meat Export Federation.

The American Soybean Association argued that China's proposed 25% tariff on soybeans would be "devastating" to U.S. farmers. China is the largest consumer of U.S. soybeans, buying about one-third of all U.S. soybean production each year, the group says. The association says soybean farmers lost an estimated $1.72 billion on April 3 alone as soybean futures tumbled.

Iowa farmer and association president John Heisdorffer called on the Trump administration to withdraw its proposed tariffs and meet with soybean farmers to discuss ways to improve competitiveness without resorting to tariffs.

China and Hong Kong are the third-largest market for California ag exports, with a value of $2 billion in 2016, according to the California Department of Food and Agriculture, reported Chico Enterprise-Record (April 1). California's exports include pistachios, almonds, wine, oranges, dairy products and hay.

“California farmers depend on trade for a living, so we are quite concerned about the retaliation resulting from the tariffs announced,” said Sara Neagu-Reed, legislative associate for the California Farm Bureau Federation.

One of Maine's biggest exports, lobster, is not being targeted by the first round of China's tariffs in the trade war with the U.S., reported Portland Press Herald (April 3). In 2017, China imported 17.8 million-lbs. of U.S. lobster. More than 80% is landed in Maine, an amount that has increased about 20% every year since 2010.

But Wade Merritt, the president of Maine International Trade Center and the state’s director of international trade, brought up that tariffs have been around for years, and are just one piece of the trade equation. “As long as they emphasize quality and relationships in their particular niches, Maine companies should be able to weather this,” Merritt said, pointing out that those two factors are what matter especially to the Chinese. “

In Washington state, the cherry, apple and pear industries have been swept up in the trade dispute between the U.S. and China, reported Seattle Times (April 2.) China is the top export market for Washington cherries, buying 2.9 million cases worth $127 million each year.

For the full story, go to this week’s Food Institute Report. Click Here