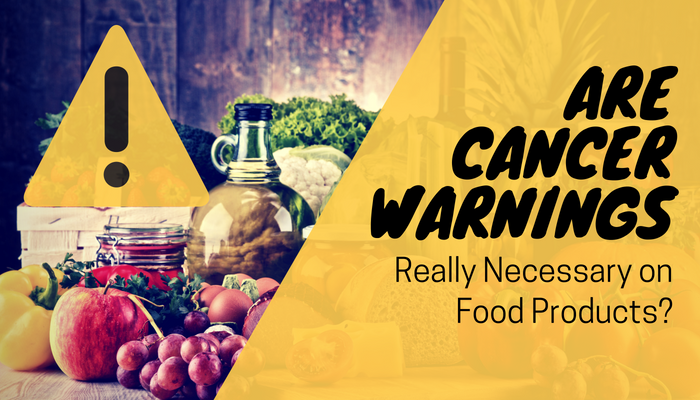 Amid a sea of new warning labels added to food products to increase transparency and help consumers make healthy decisions, California has waged its own war on a whole host of products, under the guise that they may cause cancer.

California's Proposition 65, officially known as the Safe Drinking Water and Toxic Enforcement Act of 1986, is not a new rule, but it has been receiving more publicity due to disagreements over what food products are covered under the law. Prop 65 was enacted as a ballot initiative in November 1986. It protects the state's drinking water sources from being contaminated with chemicals known to cause cancer, birth defects or other reproductive harm, and requires businesses to inform Californians about exposures to such chemicals. In addition, it requires the state to maintain and update a list of chemicals known to the state to cause cancer or reproductive toxicity (which is now about 1,000 entries long).

Most of the list does not apply to the food industry, but seven chemicals are listed that can be found in food items. Those include: acrylamide, arsenic, bisphenol A (BPA), cadmium, DEHP, lead and mercury. Acrylamide has been of particular interest as of late, especially for coffee and cereal producers.

Back in March, a Los Angeles Superior Court judge issued a tentative ruling would have require companies that make and sell coffee to include warning labels on packaged products, or post warning signs inside stores, reported Eater (April 16). Following that ruling, a group of coffee companies, including Starbucks, Caribou Coffee, Folgers, Keurig Green Mountain, and Coca-Cola, set out to prove that "coffee consumption does not increase the risk of any chronic disease and is independently associated with a decreased risk of several major chronic diseases."

Then in June, The California Office of Environmental Health Hazard Assessment proposed a regulation clarifying that cancer warnings are not required for coffee under Prop 65. It claims drinking coffee does not pose a significant cancer risk, despite the presence of chemicals created during the roasting and brewing process that are listed under Prop 65 as known carcinogens. The agency notes in a review of more than 1,000 studies, the World Health Organization’s International Agency for Research on Cancer concluded that there is "inadequate evidence" that drinking coffee causes cancer. Of course, exemption from the warnings wouldn't cover exposures to listed chemicals that may occur if the chemicals are intentionally added to the coffee mixture or enter the mixture as contaminants in some way other than the process of roasting and brewing.

This issue popped up again with a similar result, this time in the breakfast cereal sector. A California state appeals court ruled Post, General Mills and Kellogg breakfast cereals won't be required to carry cancer warnings, ordering a dismissal of a suit seeking to require warnings on 59 cereals sold by the three companies, reported San Francisco Chronicle. The court noted that while cereals contain acrylamide, requiring warnings on all foods containing the chemical at levels that pose any risk of cancer "would cause many otherwise healthy foods to appear to consumers to be unhealthful."

The court documents note a 2003 statement from the FDA Deputy Commissioner at that time stating, "FDA is concerned that premature labeling of many foods with warnings about dangerous levels of acrylamide would confuse and could potentially mislead consumers, both because the labeling would be so broad as to be meaningless and because the risk of consumption of acrylamide in food is not yet clear." In addition, it points to FDA's Guidance for Industry from March 2016, Acrylamide in Foods, in which it outlined ways to reduce the production of acrylamide in foods. In the section concerning cereal-based food, the report states, "Reducing whole grain content may also reduce acrylamide, but FDA does not recommend this approach given the benefits of whole grains."

These two acrylamide issues underline a larger labeling problem within the food industry. Companies are continually trying to skirt the line between transparency and alarmism, offering consumers enough information about their food, without confusing and/or scaring them. FDA has even been trying to right the ship in regards to its Nutrition Facts labeling laws, such as with its added sugars label, which has faced its own set of controversy.

These labeling issues are sure to keep cropping up in the foreseeable future, and you can bet The Food Institute will be here to track it. For more information on food labeling and changes to FDA's regulations, make sure to attend our annual U.S. Food Labeling Seminar, to be held in fall 2018 in the Newark, NJ area. Sign up to receive more details here.