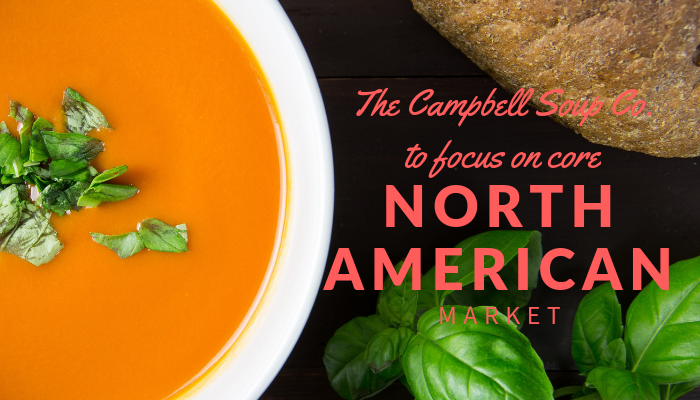 The Campbell Soup Co. will turn its focus to its Campbell Snacks and Campbell Meals and Beverages businesses in its core North American market after a foray into the fresh foods sphere.

"Campbell’s Board of Directors considered a full slate of strategic options, including optimizing the portfolio, divesting businesses, splitting the company and pursuing a sale. The board concluded that, at this time, the best path forward to drive shareholder value is to focus the company on two core businesses in the North American market with a proven consumer packaged goods business model. Importantly, the board remains open and committed to evaluating all strategic options to enhance value in the future," said Campbell’s interim President and CEO Keith McLoughlin.

The Campbell Fresh division includes two somewhat recent acquisitions. The company acquired Bolthouse Foods from a fund managed by Madison Dearborn Partners LLC for about $1.6 billion in 2012. In 2015, the company acquired the assets and business of Garden Fresh Gourmet for about $231 million. Both acquisitions were seen as a way for the company to remain competitive in a foods sector that has seen consumers increasingly turn to fresh offerings instead of pre-packaged options.

It should not be too surprising that the company is looking to divest some brands. Despite the cultural appeal of the brand, sales have been declining.  The company reported a third-quarter loss of $393 million, as compared to a $176 million profit for the same period a year ago. Additionally, in its most recent results, the company reported Campbell Fresh suffered a loss of $43 million compared with a loss of $9 million in the previous fiscal year.

After the release of the third quarter results, Food Institute President Brian Todd noted "being able to pivot to something, whether it’s changing your product or changing your process — trying to make it more appealing to consumers in some ways is important. The Campbell’s brand is still very highly respected out there, and seeing what other ways that could be used could increase their results. They indicated intention to shed some of the businesses which kind of indicates that they’re looking to restructure the company in some way,” reported NJBiz (May 18).

In addition to an ongoing CEO search following Denise Morrison's departure in May, activist investor Third Point LLC is reportedly speaking to consumer industry executives to fill a slate of nominees to challenge Campbell Soup Co.'s board of directors, according to people familiar with the matter. Douglas Conant, previously CEO of Campbell, and William Perez, a former CEO at Wm. Wrigley Jr. Co., are among the people in discussions with the firm, according to sources, reported Reuters (Aug. 31).

Much remains to be seen regarding the company's future, but there seems to be one bright spot. Global Biscuits and Snacks, which includes the recently-acquired Snyder’s Lance business, contributed earnings of $540 million in the fiscal year, up 17% from $463 million. Sales were up 31% to about $3.5 million from about $2.7 million. Not a bad business to pivot upon.