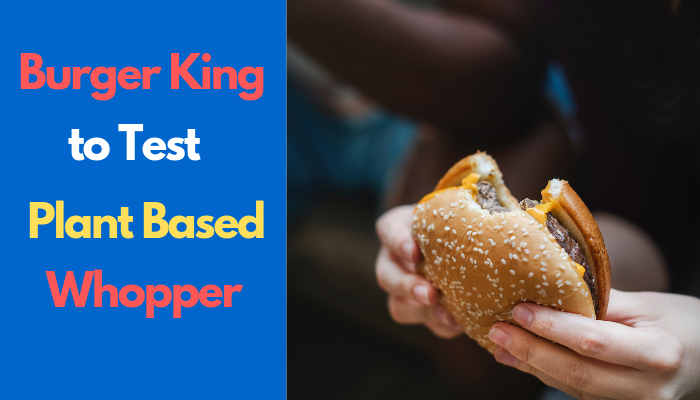 Plant-based eating is becoming even more mainstream in 2019.

As we've previously covered, the 'fad' of plant based eating isn't going away anytime soon. In fact, it's about to get an even bigger spotlight as Burger King revealed it will begin testing an "Impossible Whopper" this spring, reported The New York Times (April 1).

And no, it wasn't an April Fools' joke.

The fast-food chain will begin serving a plant-based version of its classic whopper made using an Impossible Burger patty at 59 St. Louis locations with plans to expand nationwide. The move makes Burger King the first global quick-service restaurant to embrace the Impossible Burger, reported The Idaho Statesman (April 3).

Impossible Foods was founded in 2011 by Pat Brown, a former Stanford University professor, who became a vegan soon after college and founded his company with the explicit goal of decreasing the world's reliance on animal agriculture.

"Meat lovers don't love the fact that their meat comes from dead animals. They love it because of the sensory pleasures and the familiarity," said Brown. "If we can provide the things they value and make it from plants, not only will meat lovers be willing to buy it, but they will prefer to buy it."

According to the Impossible Foods website, the burger is a meatless patty made entirely from plant-based ingredients while promising to smell, look, taste and even bleed just like beef. Some ingredients include coconut oil, sunflower oil, soy protein and soy leghemoglobin. The soy leghemoglobin found in the Impossible Burger is the secret ingredient that makes their "meat" taste like meat. Leghemoglobin is a protein found in plants that carries heme, an iron-containing molecule that is essential for life. "We make the Impossible Burger using heme from soy plants — identical to the heme from animals — which is what gives it its uniquely meaty flavor," according to the company's website.

Though it was first introduced at "trendier" locations in major cities, White Castle has sold a slider version of the Impossible burger in its 380 stores since late 2018. However, national rollout at Burger King's 7200 locations would more than double the total number of locations where Impossible burgers are available.

Burger King's chief marketing officer Fernando Machado said that in testing so far, customers and employees could not tell the difference between the original Whopper and the new one. "People on my team who know the Whopper inside and out, they try it and they struggle to differentiate which one is which," Mr. Machado said.

Burger King's research indicated that 9% of people buying plant-based meat are vegetarian, but 90% are meat eaters looking for healthier options. The Impossible Whopper will have about the same amount of protein as the regular Whopper, with 15% less fat and 90% less cholesterol. However, it is higher in sodium and carbohydrates than the original.

Besides health reasons, consumers are choosing plant based foods for sustainability reasons. Another plant based meat company, Beyond Meat, says it takes 99% less water, 93% less land and 50% less energy to make plant-based burgers.