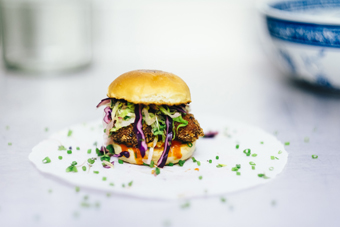 If you've been reading Today in Food, you'll notice that meatless burgers are becoming pretty popular across the country. This trend extends to retail and foodservice outlets alike. If you don't believe me, take a look at a few stories we've featured in the daily newsletter since the start of 2018:

Beyond Meat and Impossible Foods are arguably the two biggest players in the meat-less burger sphere, but they are not alone. However, these two companies serve as a solid gauge to measure interest in the category as a whole. It appears consumers are very interested in the space, as the products continue to gain space on menu boards across the nation.

However, how long will these companies be able to call such products "beef?"

If the U.S. Cattlemen's Association (USCA) gets its way, it won't be for long. The group submitted a 15-page petition to USDA to strictly define "meat" and "beef" as animal products. The company argues that lab-grown meat does not meet the definition, and that cultured products will confuse consumers. From the petition:

"[The government] should require that any product labeled as 'beef' come from cattle that have been born, raised, and harvested in the traditional manner, rather than coming from alternative sources such as a synthetic product from plant, insects, or other non-animal components and any product grown in labs from animal cells."

The petition follows similar documents submitted to U.S. regulatory agencies regarding definitions for milk. These documents always tread a fine line. On one hand, these agencies are told to protect consumers from fraudulent claims. However, regulating the terminology on product labels can also be seen as a First Amendment issue.

"We think that the cattlemen could face their competition head on," said Jessica Almy, policy director at the Good Food Institute. "Or like Tyson and Cargill, they could invest in the future. But rather than do that, they're petitioning the USDA to police the use of certain terms on labels and skew the playing field in the cattlemen's favor... I certainly think that with this petition, the cattlemen are asking the USDA to set itself up to lose in court. I think their proposal would violate the First Amendment if the USDA adopted it. The government only has the authority to regulate free speech, like telling plant-based and clean-meat companies how to label their products, if it's necessary to ensure consumers aren't misled," reported CNBC (Feb. 23).

Whether or not the petition will be successful remains to be seen, but not everyone sees the petition as the death knell for plant-based foods. Ethan Brown, founder and CEO of Beyond Meat, said consumers already know what they're looking for when they're browsing the grocery store aisles. "I think it actually could help us more than it could hurt us because it starts the national dialogue around what really is meat, and if the origin of meat really matters to the consumer."