Sep 21, 2018
The Battles Continue in an Escalating Trade War
By Chris Campbell 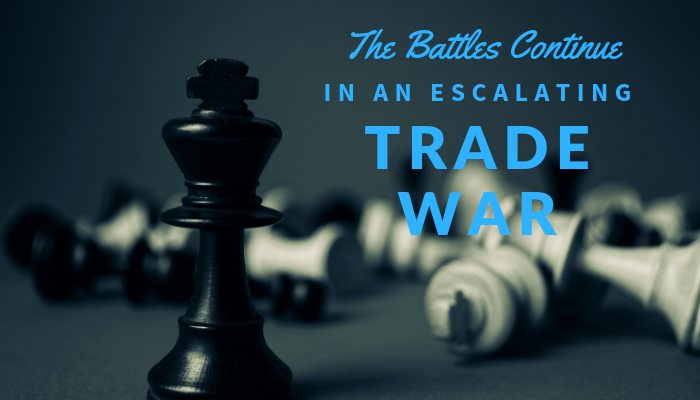 It's another battle in an escalating trade war, and once again, both sides have exchanged blows.

The U.S. Trade Representative finalized tariffs on $200 billion worth of Chinese imports. The additional tariffs will become effective Sept. 24 with a starting rate of 10% that will jump to 25% Jan. 1, 2019. The list contains 5,745 full or partial lines of the original 6,031 tariff lines that were proposed, including an extensive number of food items.

While debating the potential benefits of the current tariff situation on the entire U.S. economy is beyond the purview of The Food Institute Blog, the outlook thus far isn't great for the agricultural sector. And that's even including the recently-unveiled $4.7 billion worth of assistance programs available to U.S. agricultural and food producers.

U.S. walnut, mandarin, grape, cherry and peach exports to China are expected to be hit hardest by new tariffs, according to Rabobank. Increasing Chinese demand for the products is expected to partially offset the impacts of the tariffs, but reduced exports will follow. Rabobank predicted milder but significant negative effects for other U.S. fruit and tree nut exports.

The pain is being felt by a variety of agricultural producers, from Oregon hazelnut growers to Iowa dairy farmers to Maine lobstermen.

However, China is a major export for the signature Oregonian crop. In fact, the nation imports about 60% of Oregon's hazelnut crop. The industry had plans to expand its market in China, but a 65% tariff instituted by China is challenging their momentum. "This crop is going to double in the next four to five years. When you look at a market like China, that market is not going to double," said Patrick Gabrish, head of sales and marketing for Hazelnut Growers of Oregon. "Candidly," he said, "if the tariffs remain in place, it will impact their ability to buy Oregon hazelnuts (in China)," reported The Oregonian (Sept. 1).

The Missouri Dairy Association claims USDA's dairy-specific financial assistance package represents less than 10% of U.S. dairy farmers' losses caused by retaliatory tariffs. The association's president notes the loss for dairy farmers in the state is compounded with the current drought, and most dairy farmers are short on hay to feed this winter, reported St. Louis Business Journal (Sept. 4).

This is only being exacerbated by the trade situation with our northern neighbor. U.S. and Canadian negotiators remain in talks for a new NAFTA deal ahead of a Sept. 30 deadline. Sources familiar with the matter indicate Canada remains firm on high dairy tariffs and wants to keep a dispute-resolution process the U.S. is seeking to remove, reported Yakima Herald-Republic (Sept. 21).

Most of the reports we've uncovered at the Food Institute indicate issues for U.S. producers. For example, U.S. live lobster sales to China hit a two-year low in July, the first month a tariff on exports took effect. The U.S. shipped $4.2 million worth of live lobster to China in July, a 64% decline from May and June levels. Before the tariff, the U.S. sold $87 million worth of lobster to China, double the year-to-date totals during that same period in 2017, reported Portland Press Herald (Sept. 10).

These issues are extending beyond Sino-American relations, as well. Canada's lobster exporters noted Maine lobstermen now priced out of China are selling their products in other Asian and Europe markets at lower prices. Seafood processors cite Hong Kong, Malaysia and Taiwan as Asian markets where lobster from the U.S. are now selling at least $1 cheaper, putting pressure on sales of Canadian lobster, reported CBC (Sept. 8).

However, not every U.S. industry is feeling the pressure of the tariff situation. For example, although China imposed a 40% duty on U.S. pears, the Northwest Horticultural Council notes the country isn't a huge export market for the product and should not affect overall U.S. exports in a significant way. Instead, the council noted the Northwest pear industry will move to enter new markets in 2018, with a focus on Burma and Cambodia, reported The Packer (Sept. 17).

Evidence indicates this trade war appears to be escalating: President Trump is considering additional tariffs of Chinese products in addition to the $200 billion scheduled to take effect Sept. 24, according to media reports. In response, China promised retaliatory tariffs if such an event occurs. I guess we will just have to wait and see how the trade war pans out.