May 14, 2019
Amazon and Walmart Compete for One-Day Delivery
By Victoria Campisi 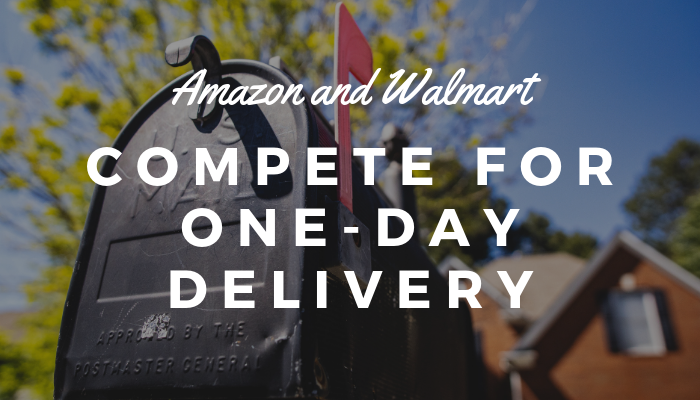 The battle for next-day delivery is officially underway.

Back in April, Amazon revealed plans to make free next-day shipping the standard offer for Prime members, instead of two-day shipping, reported CNBC (April 25). The company is planning to invest $800 million to make this happen.

Soon after, Walmart fired back with a tweet on April 26 hinting at its own switch which read: "One day-free shipping…without a membership fee. Now THAT would be groundbreaking. Stay tuned."

Now, the tweet has become true. Walmart will begin offering one-day delivery services in Phoenix and Las Vegas, with plans to expand to Southern California soon after and to 75% of the U.S. by the end of 2019. Over 220,000 items will qualify for the service.

The company has not disclosed the cost of the move, but has been working on it for a while now, reported CNBC (May 14).

"We have been working on this for the past several years," Marc Lore, head of Walmart's e-commerce business in the U.S., said about the move toward next-day shipping. "We've been investing ... and now we are in the position to reap the benefits."

Although Walmart's program requires a minimum purchase amount unlike Amazon's, Walmart hopes that it can distinguish its service from Amazon Prime because Walmart customers won't need a membership to receive next-day delivery, reported CNN (May 14).

"One-day shipping is going to be the customer expectation now," said Laura Kennedy, analyst at Kantar.

However, one-day shipping creates challenges. Amazon's announcement drove down the stocks of Walmart, Target and other retailers. Investors feared that if they enacted one-day shipping to compete with Amazon, their margins would be squeezed even tighter.

Additionally, Walmart is on track to offer Grocery Pickup from 3,100 stores and same-day Grocery delivery from 1,600 stores by the end of 2019, which will provide coverage to approximately 80% and 50% of the U.S. population. BMO predicts Walmart's Alphabot robotics system could support significant efficiencies over time.

The portion of people buying groceries online who bought from Walmart jumped from 25.5% in 2018 to 37.4% in 2019. As Walmart's Grocery Pickup will only expand over the rest of 2019, Amazon's first place spot could be in trouble in next year's survey.