Jun 5, 2019
Avocado Prices Could Go Up with Tariffs
By Chris Campbell 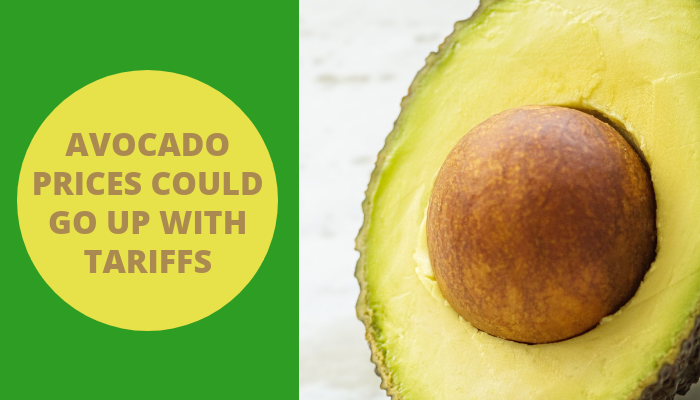 Nothing quite scares people like the specter of increasing avocado prices.

As the Mexican Senate convened to deliberate ratification of the USMCA, President Trump tweeted May 30 that the U.S. would impose a 5% tariff on all goods imported from Mexico beginning June 10. Citing the International Emergency Economic Powers Act, the president noted increases of 5 percentage points were scheduled monthly through Oct. 1, when the rate would cap at 25%.

"If Mexico fails to act, Tariffs will remain at the high level, and companies located in Mexico may start moving back to the United States to make their products and goods. Companies that relocate to the United States will not pay the Tariffs or be affected in any way," the administration said.

Prices of Mexican berries and asparagus would likely increase after the tariffs were instituted, as would anything else being imported into the country. But nothing is scaring Millennials more than the prospect of a 25% tariff on avocados, reported Bloomberg (May 31).

For a company that goes through 450,000 avocados a day, Chipotle Mexican Grill is already preparing to contend with the tariffs, arguing they could add $15 million to its costs in 2019. Chipotle CFO Jack Hartun said if the tariffs become permanent, the company would offset them through cost-cutting efforts or modest price increases, such as five cents per burrito, reported Las Vegas Sun (June 3).

When it comes to U.S. consumers picking up the tab, Mexican avocado growers are in agreement: most expect U.S. consumers will bear the brunt of potential tariffs. The growers argue global demand for the product continues to rise, and a weak 2019 California crop is limiting sourcing options for U.S. foodservice and retail operators, reported Yakima Herald-Republic (June 1).

"Fortunately, the avocado is a fruit that's in demand more every day around the world, that's consumed in many other countries," said Enrique Bautista, a 69-year-old avocado farmer in Uruapan, Michoacan, Mexico. "I think the bigger risk is for U.S. consumers" who will have to pay more for the product.

Fellow Michoacan avocado producer Humberto Solorzano agreed, saying "We are living in a sellers' market." Michoacan is where 80% of Mexican avocados are grown.

The tariff situation is complicated by the fact that the U.S. avocado industry is preparing for its worst harvest in a decade. The California Avocado Commission projected a crop of 175 million-lbs. in 2019, just higher than the 174.5 million-lb. crop encountered in 2009. The crop is down 48% from 2018, reported Fresh Fruit Portal (Feb. 18).

Intense heat in July 2018 pushed down California avocado volumes in 2019, but sizing is trending up, according to Del Rey Avocado Co. The company noted the 40 size, which is typically 10% of its annual crop, constitutes about 15% to 20% of the 2019 harvest, reported AgAlert (June 5).

The weather was the culprit for the decreased production. "There are areas that should have had much better production that were really impacted by those temperatures that went well over 100 degrees – some places got 116 or 117 for a short period of time – and unfortunately that took its toll," said California Avocado Committee President Tom Bellamore.

Although the lion's share of avocados are produced in Mexico and California, they are not the only global players. Some reports are expecting declines for Peruvian and South African production in 2019 — Peruvian avocado growers could ship between 160 million-lbs. and 180 million-lbs. of product to the U.S. market in 2019, according to the Peruvian Avocado Commission. However, the season opened much earlier in 2019 with more than 20 million-lbs. shipped by June 1, compared to less than 3 million-lbs. by the date in 2018, reported The Produce News (May 31).