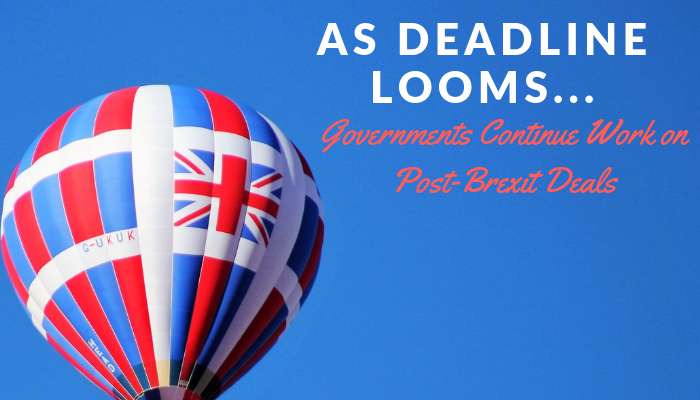 As the deadline looms, the UK, EU and the U.S. are trying to work out deals for the post-Brexit world.

(Note: Last week, I published what could serve as a primer on Brexit. I'd suggest reading through that before catching up on the latest updates.)

The U.S. set out its aims for a post-Brexit trade deal including greater access to food markets where products such as chlorinated chicken or hormone-fed beef are banned under EU rules. The Trump administration is seeking to eliminate or reduce barriers for U.S. agricultural products and secure duty-free access for industrial goods. It is looking to remove "unwarranted barriers" related to "sanitary and physiosanitary" standards in the farm industry, reported The Guardian (March 1).

However, the UK will follow all EU food safety and animal health regulations for at least nine months in the event of a no deal Brexit. The move was proposed by the Department for Environment, Food and Rural Affairs to protect British farming, reported Reuters (March 1). Additionally, the UK noted it would not lower food standards to meet U.S. demands to secure a post-Brexit trade deal, according to government officials, reported BBC (March 1).

"It is imperative that any future trade deals, including a possible deal with the U.S., do not allow the imports of food produced to lower standards than those required of British farmers," said National Farmers' Union president Minette Batters. "British people value and demand the high standards of animal welfare, environmental protection and food safety that our own farmers adhere to. These world-leading standards must not be sacrificed in the pursuit of reaching rushed trade deals."

The UK could slash trade tariffs on up to 90% of goods in the case of a no-deal Brexit, including some agricultural products, according to sources familiar with the matter. Beef, lamb and dairy products would still be protected under the proposed plan, reported Sky News (March 6).

Meanwhile, the EU characterized talks with the UK as "difficult" in attempting to come to a Brexit agreement. The EU stated no solution has been identified at this point, reported The Wichita Eagle (March 6).

Those difficult talks came to a head in the UK as British farming minister George Eustice resigned over Prime Minister May's decision to offer Parliament a possible vote on delaying Brexit. May responded saying the focus of the government "should be on getting a deal that can command support in Parliament and leaving on March 29," reported Reuters (Feb. 28).

As always, keep your eyes on The Food Institute Blog for the latest developments in the lead-up to Brexit.