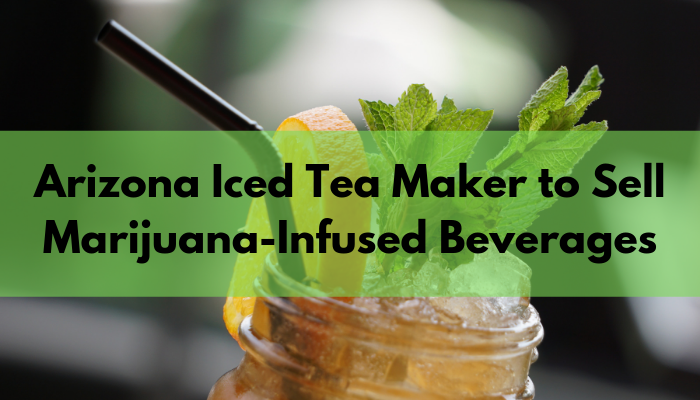 The company behind the U.S.'s leading iced tea brand is getting into the cannabis business.

Arizona Beverage Co. reached a licensing deal with Dixie Brands Inc., a Denver-based cannabis company, reported The Wall Street Journal (Aug. 7). Under the agreement, Dixie will manufacture the products and sell them through licensed dispensaries.

Plans for the line are in the early stages, but it is likely to start with vape pens and gummies, followed by a variety of beverages that could include tea, lemonade, soda, coffee or seltzer. Dixie intends to launch the line in the U.S., and then expand to Canada and Latin America.

Arizona is hoping to get a head start in the U.S. cannabis market over those taking a more cautious approach. Companies such as Corona brewer Constellation Brands Inc. and Coors Light brewer Molson Coors Brewing Co. are developing marijuana-laced drinks in Canada but waiting for cannabis to be federally legal before bringing them to the U.S.

"You've got to be willing to try things," said Don Vultaggio, Arizona's chairman and CEO. "The upside is we're one of the first ones in an emerging space."

Arizona is one of the first big American brands to get into the marijuana market. In 2018, Heineken NV's Lagunitas brewery worked with a California cannabis company to launch a weed-infused sparkling water called Hi-Fi Hops—though it is only available in California.

In the U.S., 11 states legalized recreational marijuana, with medical marijuana legal in over 30. But since cannabis is still prohibited by federal law, it cannot be transported across state lines and many banks won't take money derived from cannabis sales.

Meanwhile, in Maryland, state regulators proposed a set of new rules that would govern the production and sale of medical cannabis-infused foods in the state, reported Baltimore Business Journal (Aug. 6).

In order to manufacture and distribute edibles, licensed companies must obtain a permit to sell cannabis-infused foods, pass a special inspection and complete a food handler certification course, and all products must contain no more than 10 milligrams of THC, feature a full list of ingredients, and must not be distributed in shapes, flavors or packaging that is likely to appeal to minors.