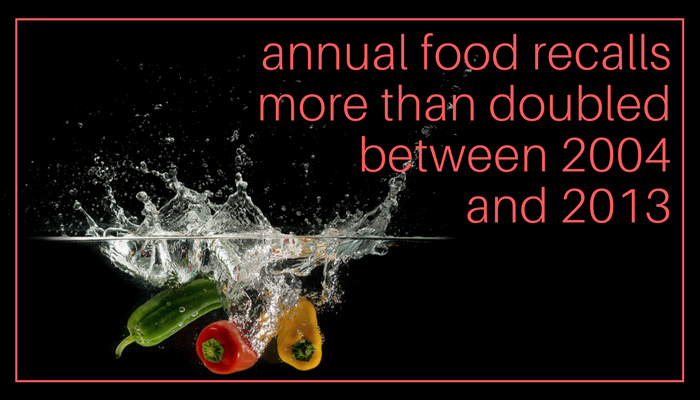 Currently, the U.S. is contending with a salmonella outbreak linked to shell eggs and an E. coli outbreak linked to romaine lettuce. Although neither has claimed a life as of press time, experienced food industry professionals know that tainted food can cause significant losses of life and productivity. In fact, the CDC estimates foodborne disease causes approximately 548 million illnesses, 128,000 hospitalizations and 3,000 deaths per year in the U.S.

Put another way, one in six Americans becomes ill from consuming contaminated food every year.

One of the easiest ways to prevent the spread of foodborne illnesses is the recall system, which was bolstered by recent legislation including the Food Safety and Modernization Act (FSMA) and Food Allergen Labeling and Consumer Protection Act (FALCPA). And luckily, USDA found a way to quantify recalls and their effect.

U.S. food recalls jumped to an average of 676 per year between 2009 and 2013, up from the 304 per year average encountered between 2004 and 2008, according to a report from USDA's Economic Research Service entitled "Trends in Food Recalls: 2004-13." The agency noted that although an increase in the volume of food sold in the U.S. during the time frame partially explains the increase, other factors including improved pathogen detection technology, regulatory oversight, increased enforcement and the passage of food safety legislation like FSMA contributed to the increase.

Six categories accounted for the majority of food recalls within the 2004 to 2013 timeline. Prepared foods and meals, excluding soups, represented 11.9% of all food recalls, followed by nuts, seeds and nut products (10.9%) and baked goods (9.0%). Grains and grain products, candy products, and sauces, condiments and dressings rounded out the top six, representing 8.4%, 7.9% and 5.0% of total food recalls, respectively.

The top reason for recalls of nut products was potential salmonella contamination. For the remaining five categories in the top six, the top reason for a food recall was undeclared allergens. While the number of food product recalls increased across every food category, the increase was statistically significant only for grain products, animal products and prepared foods and meals.

About 41.0% of recorded recalls were the result of pathogen contamination, including salmonella, E. coli and listeria. About 27.4% of the recalls were due to undeclared allergens. Although the numbers of recalls due to pathogenic contamination did not increase significantly over the course of the decade, the number of allergen recalls nearly doubled. USDA credited the passage of FALCPA as a major driver behind this increase.

Food product recalls of common ingredients may have significant and exponential impacts on manufacturers and users of recalled ingredients. From 2004 through 2013, 22.4% of all recalls were the result of an upstream ingredient being recalled first, representing the interconnected nature of the food stream.

Thirty-five percent of consumers are very confident the food they're buying is safe to consume amid the pandemic, according to the International Food...