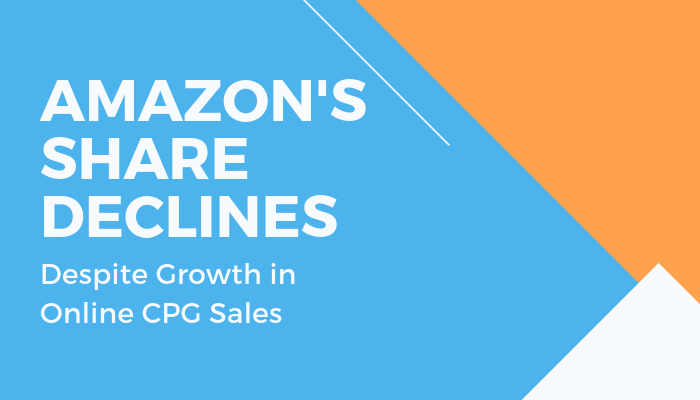 Amazon is still number one in online consumer packaged goods, but its share growth is slowing down.

Traditional and non-traditional retailers have been accelerating their omnichannel offerings and strategies in response to Amazon, and these adjustments have helped them steal some share away from the global online player, according to Nielsen.

Amazon still continues to dictate the pace of change, driving a third of all growth experienced in CPG e-commerce since 2017. Despite its growth, shares have declined because of the overall success in consumer adoption of e-commerce in CPG.

While Amazon-branded CPG products are growing at 81%, the company still has much work to do before reaching the private-label share that its competitors maintain. "As a more recent entrant into the grocery space, Amazon is still well behind the competition when it comes to private-label CPG," said Andrew Lipsman, principal analyst at eMarketer. "With all the talk of Amazon competing with sellers on its platform, this is a good reminder that the situation isn't especially unique."

Still, 66% of U.S. brands are concerned with the competition from Amazon's private-label business, according to a report by Feedvisor.

Consumables in CPG now represent $1 in every $3 spent online. Although food and beverages have been among the hardest products to sell online in the past, growth of e-commerce for food and beverages is up 46% in each of the past two years.

Amazon's grocery brands were up 135% in 2018, outpacing overall CPG private-label growth on the website by wide margins.

Competitively priced and timely delivery, as well as a large array of pick-up locations and click-and-collect models, has caused online fulfillment of CPG e-commerce to become redefined in America. However, the U.S. market is still in its early stages when it comes to adopting and localizing online purchase fulfillment.

One in 10 surveyed Americans are now using in-store click-and-collect purchases, while 29% of Indian, 27% of Vietnamese and 26% of Chinese shoppers are already accustomed to ordering online and picking up their purchases in store.